Nuclear Terrorism News that the MSM Refuses to Report


Columnist Paul Krugman is a member of a not-so-elite group of New York Times columnists that despise George W. Bush. He, along with his posse -- Rich, Dowd, Herbert, Friedman, Miller, Keller, and Schmitt -- love deriding the administration as "The Bushies" and have hammered every policy imaginable. In fact, Bushies is so uproariously funny, the Times crew has used it nearly 150 times. Talk about unbridled hilarity! 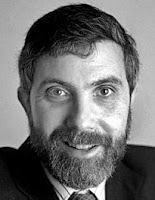 Krugman uses another clever device to mock policy: a trademark symbol after "Global War on Terror".


Krugman, in his traditional verbose style, mocks the concept. Never mind the global jihad that has claimed countless lives of innocents in dozens of countries throughout the world.

The real problem with Krugman's approach is that it fails to consider actual news that the Times refuses to report.

Scientists beg to differ with Krugman's view. On June 12, Agency France Presse -- not exactly a mouthpiece for right-wing views -- reported on an ominous worldwide conference of security experts.


Not to worry. Krugman and the rest of the geniuses at the Times know far more about the risks than the club of nuclear physicists and a global cadre of security experts.

* * *
Democrats and the mainstream media pretend that this catastrophic risk doesn't exist. By dismantling the Patriot Act, hampering the NSA's international terrorist surveillance, revealing the SWIFT tracking program, and hamstringing the war effort, they hasten the day that nuclear devices are unleashed in American cities.

On that day, any real-time polling will show that a large percentage of Americans have converted to the Republican Party. And Paul Krugman, if he's still alive after the attacks, will be singing a very different tune indeed. And I can guaran-damn-tee he won't be typing a trademark symbol after War on Terror.

Update: More good news for Krugman. LGF links to a report that an Al Qaeda cell is "either in the U.S. or on the way".
at 9:09 PM
Email ThisBlogThis!Share to TwitterShare to FacebookShare to Pinterest
Labels: Democrats, extremism, MSM, New York Times, War