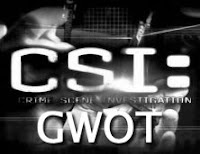 In 2008, Congressional Democrats forced the prison and military court at Guantanamo Bay to close. The junior party insisted that terrorists captured on the battlefield be given the rights of U.S. citizens...