It ain't exactly beach reading, but the University of Maryland has released its new Global Terrorism Database, or GTD2. It's a detailed repository of the more than 80,000 incidents of terrorism that have occurred globally since 1970.

The level of detail is astounding. The perpetrators, weapons used, fatalities, casualties, types of target and related data fields are provided for each incident.

According to a spokeperson at the University, GTD2 "is the most comprehensive unclassified database on terrorist events in the world."

Potential users include law enforcement, first responders, civil defense authorities, and others who need to quickly log and identify terrorist activities. Furthermore, it can help identify attackers based upon the analysis of the details of an incident; i.e., the modus operandi. 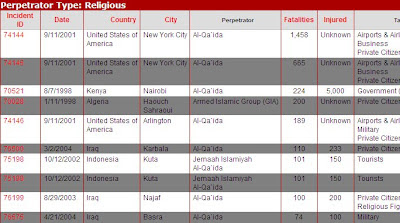 The database was assembled by the National Consortium for the Study of Terrorism and Responses to Terror (START), which is funded in part by DHS. It includes information on 27,000 bombings, 13,000 assassinations, and 2,800 kidnappings. The project currently requires 75 data collection analysts with 12 advisor-specialists in terrorism research. The team operates in six language groups. It gathers data from around 25,000 different sources including government agencies and the media.

But don't bother telling the Democratic candidates for President. During last night's "YouTube" debate... in the midst of a war involving 160,000 of our armed forces... only five years removed from the worst terrorist attacks in the history of the world, there was not a single question about terrorism.

So for everyone except for Democratic candidates, GTD2 is a fascinating source of data for those interested in combating the likes of Al Qaeda.

Update: LGF alerts us to a Rudy Guiliani press release: