Behold: Markos the Merciless and the Democrats


The Daily Kos website, host to a large number of military-bashers, anti-semites, and 9/11 troofers, has begun a major pogrom intended to purge the site of embarrassing Leftists. From the looks of things, Kos is feeling some pressure to clean up his act prior to the YearlyKos event. 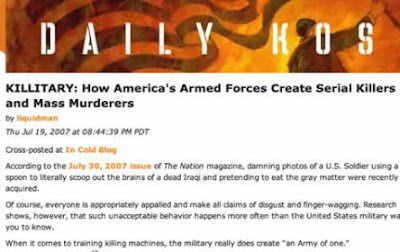 Why? All of the serious Democratic candidates are paying homage at the event, in the hopes of generating major Internet momentum. Problem is, the Kos site has become a hub of bizarre activities. Consider:

- Daily Kos: KILLITARY: Are America's Armed Forces Creating Serial Killers and Mass Murderers?
- Daily Kos: Arkin Was Right - We Do Have a Mercenary Army and They Do Owe Us!
- Daily Kos: "I support our troops - cowards, queers, and all"
- Daily Kos: Hamas brings peace and tranquility to Gaza
- Daily Kos: Neocon Fear of Iran is Worse than Iranian Nukes
- Daily Kos: Stopping Christian Zionism and Hanging with Hamas
- Daily Kos: The Apartheid Phone System of Palestine*
- Daily Kos: Support Hugo Chavez
- Daily Kos: Restoring the Palestinian Voice to Daily Kos
- Daily Kos: "Lieberman should be gassed"
* featuring infamous whackjob author Eileen "The ultimate goal of the Zionists is one-world government under the control of the Zionists and the Zionist-oriented Jewish international bankers" Fleming

And those are just a few of the entries captured since May 15th, 2007.

The Democratic candidates must be so proud to be associated with this fine, upstanding website!

Needless to say, Kos is is extremely upset with this unwanted attention, now that all of the Democratic candidates are paying him some attention. How upset is he that peeing in the pool has become routine? Well, by golly, he's reached the Genghis Kahn level of upset-hood:


Pity Markos the Merciless can't muster the same level of anger against the religious extremists who killed 3,000 of his innocent countrymen on September 11th -- and have promised to kill "four million [more] Americans, two million of them children." 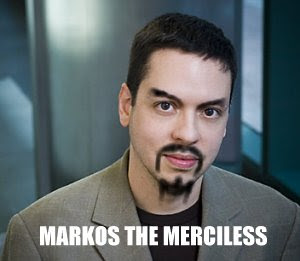 But showing anger against Islamist terrorists wouldn't be "progressive."

Shocked that Democratic candidates cuddle up to the denizens of Daily Kos? Don't be. That's how far left the party of Jack Kennedy, Harry Truman, and Franklin Roosevelt has fallen. Those three, great presidents wouldn't even recognize today's Democratic Party. Sometimes I think it's the gyroscopic energy of FDR, JFK, and Truman spinning in their graves that keeps the Earth aligned on its axis.
at 8:22 PM
Email ThisBlogThis!Share to TwitterShare to FacebookShare to Pinterest
Labels: Democrats