Standard & Poor's offers a startling report regarding runaway entitlement programs. The accompanying illustration highlights the problem. All of the major world economies are poised to become junk-status debtors if entitlement spending remains unchecked. And some countries fold sooner than others (France!). 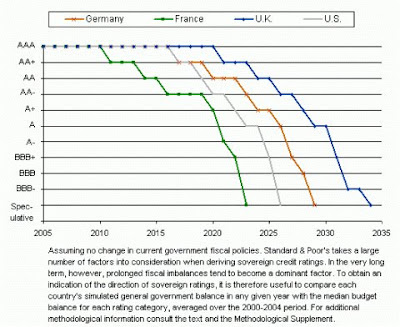 Swimming upstream against both the mainstream media and organized labor, President Bush courageously attempted to begin the reformation of social security. It didn't work. But that didn't stop the countdown; the clock is still ticking.