Hillary Clinton was more than willing to embrace a controversial businessman named Peter Paul when she needed money for her Senate campaign in 2000. The result was a spectacular, private Hollywood fundraising gala that reportedly cost nearly $2 million. The problem for Hillary? The money was not fully disclosed to the Federal Election Commission and the portion that was reported ended up categorized as a "soft dollar contribution." 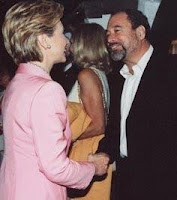 Last month, a a "smoking gun" video surfaced in the Paul vs. Clinton civil suit that appears to show Hillary and her agents helping to plan the fundraiser. Some election observers believe that this is evidence of Hillary's solicitation of a hard-money donation, which -- because it far surpasses the limit of $25,000 -- is a felony offense.

Fast forward to 2006: Hillary testifies in the Paul vs. Clinton civil case

In a sworn declaration taken on April 7, 2006, Hillary Clinton testified that she had "no recollection whatsoever of discussing any arrangement with [Peter Paul] whereby he would support my campaign for the United States Senate... I do not believe that I made any such statements because I believe I would remember such a discussion if it had occurred."

I wonder if she remembers the discussion now?

Hillary Clinton talking to Peter Paul on speaker-phone: "...What ever it is you're doing, is it okay that I thank you? ...I'm very appreciative... it sounds fabulous, I got a full report from Kelly... uh... today, when she got back, and told me everything that... uh... you're doing and it just sounds like it's gonna be a great event..."

Clinton's participation in the planning of the fundraising event "...would make Paul's substantial contributions a direct donation to her Senate campaign rather than her joint fundraising committee, violating federal statutes that limit 'hard money' contributions to a candidate to $2,000 per person. Knowingly accepting or soliciting $25,000 or more in a calendar year is a felony carrying a prison sentence of up to five years."

Was there an attempted coverup by Clinton appointee Judge Howard Matz?

In 2005, Judge Howard Matz presided over the trial of Hillary's finance chairman David Rosen. Rosen was facing three counts of causing false statements to be filed with the Federal Election Commission in connection with the Paul fundraiser. 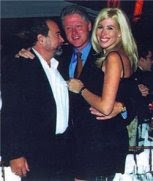 During the trial, the New York Times reported:


The video shows that the behavior of Matz and Zeidenberg was either biased, ignorant or perhaps even criminal. At best, they mistakenly fibbed. At worst, they should be investigated. The video record appears to demonstrate that they were completely and utterly wrong about Hillary Clinton's involvement.

Oh, one more thing: Matz was appointed to the U.S. District Court for the Central District of California by none other than Bill Clinton in March of 1998. Nah, that couldn't have had anything to do with his egregious behavior.

Truth-Boating Hillary: What you can do

Ready to help Truth-Boat Hillary? Here's how you can help get the word out and stop the mainstream media blockade of this news:

* Email your friends the link to this story and ask them to spread the word.

* Add Equal Justice Foundation and the Hillary Accountability Project to your blogroll.

* Contact your local newspaper, radio, and television personalities and spread the word of Hillary's Smoking Gun video. YouTube is always hot news and this video is smokin' hot.
at 8:40 PM
Email ThisBlogThis!Share to TwitterShare to FacebookShare to Pinterest
Labels: Democrats, Hillary