Fire up the Tivo for Monday Night's O'Reilly Factor


Monday's O'Reilly Factor should be a keeper. O'Reilly has promised to go after hard left rally site Daily Kos, turning over the rocks to expose a plethora of crackpots that harbor virulently anti-American, Communist, and antisemitic leanings. 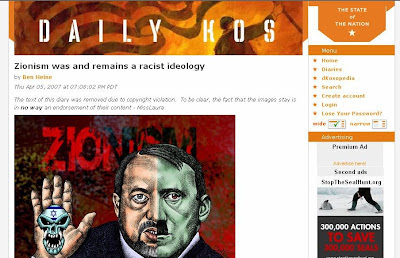 One of Kos' greatest hits
With Democratic candidates scheduled to pay a visit to his YearlyKos event, Markos appears to have gone on a hurried cleaning binge, attempting to purge the site of offensive material. Too late! Consider the following choice items from the last several months:

The Democratic candidates must be so proud to be associated with this fine, upstanding website!

Update: Gateway Pundit notes a feeble attempt by MoveOn.org to organize a boycott of O'Reilly. Hmmm. That sounds like a bold strategy. Only they better start altering the A.C. Nielsen database first.
at 7:05 PM
Email ThisBlogThis!Share to TwitterShare to FacebookShare to Pinterest
Labels: Democrats, MSM