A couple of days ago, I posted an article that summarized the iPhone's unique terms of service as required by AT&T. It was really aimed at a few family members and associates who believe Steve Jobs walks on water and has a magical ability to turn wine into vodka. I didn't give the post a second thought.

However, within a few hours, it had been submitted to Fark, a popular link aggregator. Fark resulted in 5,000 visitors during the day -- a large number for this site, though well short of the record (18,000 - achieved when this story hit the front page of Digg).

A day later, the traffic hose really started hitting the site after someone submitted the site to Digg and it graduated to the front page. Furthermore, it actually became the most popular tech story for a 24-hour period.

In other words, the story hit the traffic jackpot. Now for the graphs! 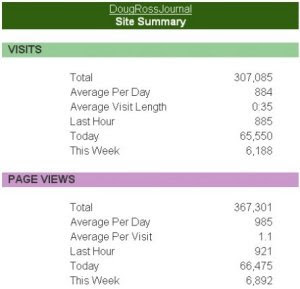 Here's the snapshot of a daily summary from about 10pm, when I had to catch some ZZZ's. 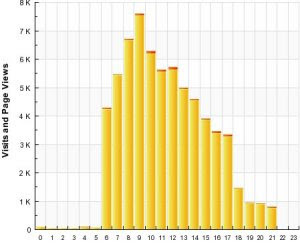 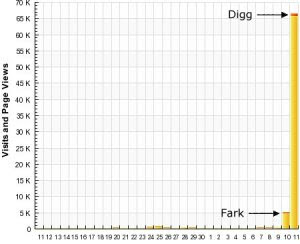 The month view: note the Fark effect, followed a day later by the Digg effect. 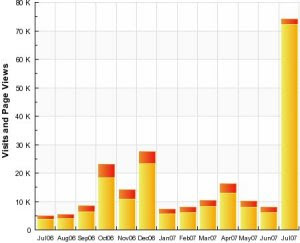 The yearly view. What a difference a Diggalanche makes!

What's kinda humorous about this is that LGF and Instapundit probably achieve double this much traffic every day of the week.
at 7:32 PM
Email ThisBlogThis!Share to TwitterShare to FacebookShare to Pinterest
Labels: Web 2.0