In the spirit of bipartisanship, Mr. Speaker, let the Senate Democrats shut the government down

Andrew Stiles reports that Senate Democrats are trying to force a government shutdown, a cold, political calculation that could very well backfire on them. 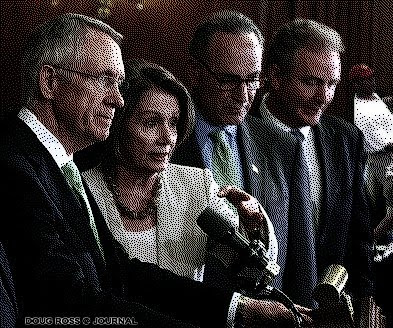 House Republicans are preparing a third short-term spending resolution in the event that a long-term compromise cannot be reached with Senate Democrats and the White House before April 8, GOP aides confirm. That scenario suddenly looks a lot more likely after a tense back-and-forth Monday between leaders on both sides of the debate. The measure would last for one week, cut $12 billion in domestic discretionary spending, but would include funding for the Defense Department until the end of the current fiscal year (September 30).

The problem is two-fold for Democrats.

Most Americans, who realize the government has a disastrous spending problem, support a shutdown of non-essential services.

Second, the longer taxpayers realize a shutdown actually benefits them -- and has no visible impact on their lives -- the worse a public relations problem it becomes for the Pelosi Party.

It ain't 1995, Mr. Speaker. In the spirit of bipartisanship, let the Democrats shut the government down.

"Most Americans, who realize the government has a disastrous spending problem, support a shutdown of non-essential services."

AMEN! And to keep talking about a 'shut down' as if that's a bad thing just isn't working anymore. So if that's what it takes to get them to stop spending, then do it. For a nation 14 trillion dollars in debt, there is no downside. None at all.

The US Government has OUTLIVED ITS USEFULNESS.

Local militia can and should take over from here.

The US Government is now an anarchy utterly beyond any control - unless it can be shut down; shut down cold; and shut down hard.

The US Government is ANTITHETICAL, if it has a theory at all beyond theft, to the principles which made America great.

SHUT THIS ABOMINATION DOWN NOW.

Please God, Shut the government down. Throw us a bone!