The word disgusting doesn't begin to describe the actions of these progressive loons -- especially seeing as how we're just hours after Memorial Day. 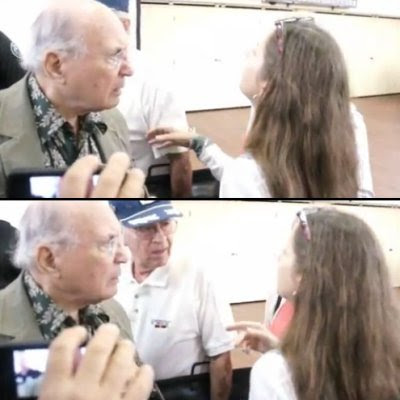 The scene: a town-hall event for Rep. Allen West. At the behest of Debbie Wasserman-Schultz or her ilk, progressives make a make a habit of targeting West because they hate the Constitution and they despise America*. They know that West stands for both -- and, unlike these punks, he's put his life on the line protecting their right to protest him.

In what appears to be the aftermath of a town-hall, several World War II vets stand up for West as a couple of the moonbats try to insult him.

Instead of honoring their service, the liberals go after these heroes, to the point of putting hands on one while dropping the f-bomb on him.

Because that's the way liberals roll, don't ya know?

These progressives disgust me. They ought to hang their heads in shame, but that would require the capability of actually feeling shame.


* Sorry, drones, but you can't love America and support a presidential candidate who repeatedly promises to 'fundamentally transform' it, as Barack Obama did.

Remember not too long ago when the progs screeched, "DON'T QUESTION OUR PATRIOTISM"?

There's a reason they reacted this way: because they know we should be questioning their patriotism.

She's lucky she's not my kid. What an embarrassment.

If Barry had a Father he would look like like Rudy Eugene. And now the children are congregating, where's the surprise in this?

If Barry had a Father he would look like like Rudy Eugene. And now the children are congregating, we're to be surprised?

Memorial Day. Who gives a shit.