I blame Bush: Facebook loses $35 Billion In Value Since IPO

In emulating President Obama, I feel it imperative that we identify a scapegoat for this disaster. And who better than George W. Bush? Or, at the very least, Millard Fillmore? Or anyone but the Democrat National Committee's Wall Street backers, in fact.

Pain, pain, and more pain for Facebook’s stock. Facebook sunk into the $20s for the first time today, declining about 9 percent as options trading started. The decline also came a day after a third wave of reports came out about a Facebook phone, which would push the company into the risky and expensive world of building hardware. 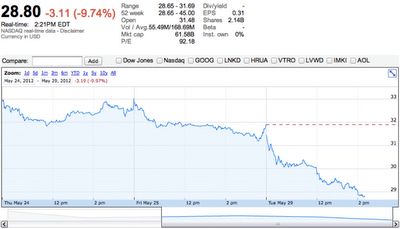 The key factor affecting share prices might be options trading. Bloomberg said that puts are exceeding calls by 1.3-to-1.

This must be a good thing, right? Because we know that income inequality is evil. Certainly it's not fair that Facebook's founders are worth billions. We need everyone to be equal, kind of like in North Korea or Cuba or Zimbabwe.

I blame Al Gore -- He invented the Internet.