I'm not sure who first located this revealing video. However, American Power links to Blazing Cat Fur (which has the LiveLeak video that was posted after YouTube pulled its version down) that links to Pat Dollard that links to Last Refuge.

The latter site offers significant evidence that the observer in the striped shirt and white ball-cap is Trayvon Martin. First, here are some stop-action photos of the fight between two unnamed combatants. In the video, Trayvon's name is called out about five seconds in.

And, in this particular instance, an MMA-style knee to the face ends the battle. At which point, the observer identified as Trayvon rushes out to congratulate the victor. 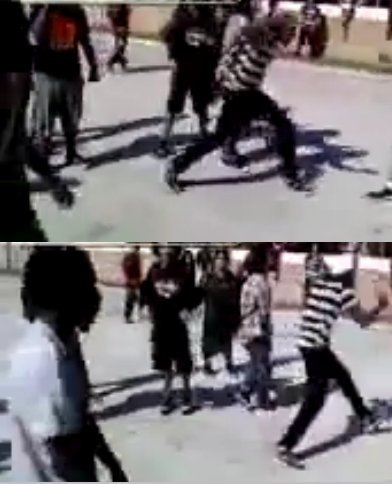 All of this makes it appear Trayvon could have had some practice beating on "white Hispanics" (the new racial group that our beloved Democrat-Media complex invented to prejudge George Zimmerman).

But aside from the blunt-smoking, the fight clubs and the White Hispanic-head-bashing, I'm betting Trayvon was just as angelic as the Democrat-Media portrayal implied.

The truth will only matter to those willing to listen to it.

Race hustlers like Jackson and Sharpton have poor little saint Trayvon of the holy Skittel to agitate the crowds and further their own "careers".