Curiously, I haven't heard a word about this on ABC, CBS, NBC, CNN, or PMSNBC.

It has been well known for years that President Obama was an avid user of cocaine and marijuana in both his high school and college years. However, the rabbit hole appears to be much deeper than previously thought.

Over the last few days, Mr. Obama's "rules" for taking drugs has been widely publicized. The fact that President Obama took so many drugs that he needed specific guidelines should speak for itself.

Additionally, and possibly most shocking, we have learned that in his high school year book, Mr. Obama thanked his drug dealer by name... The dealer's name was Ray. You can see a picture of the high school yearbook below: 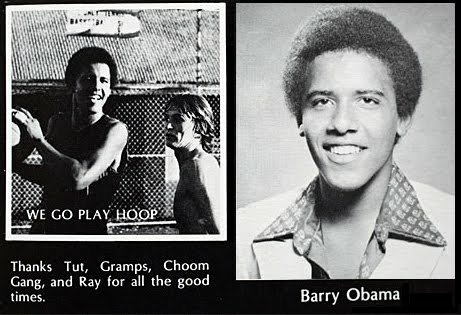 So what happened to Ray, you might ask. Why has he not spoken up about this incident? Well, "Many years later they learned that he had been killed with a ball-peen hammer by a scorned gay lover."

Say, did you hear about the time Mitt Romney gave a kid a wedgie in junior high?

"I know of only two individuals who attended Punahou at the same time young Barry did; one was older and one was younger. The senior only remembers him as the Popolo kid (one of two) and the younger one remembers him the same.....but, along with his buddy Keith Kakugawa, as the campus drug dealers."

And they got the drugs from FRank Marshall Davis.

That Ray was gay is new to me, but fits with all the other guys in Obama's life.