If this report is accurate, Lawrenceville Plasma Physics (LLP) has some serious explaining to do. 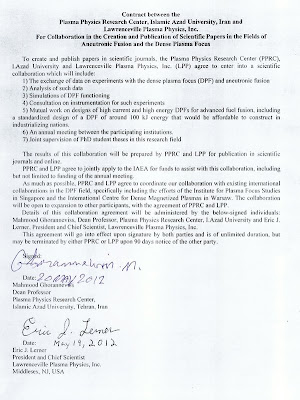 [LLP] announced they've already "signed a contract on May 20 with the Plasma Physics Research Center (PPRC) of I. Azad University in Tehran, Iran." ... A quick Internet search of this Iranian institution — consisting of a chain of colleges — shows that its full name is "Islamic Azad University." It's a small detail, but a little strange of the LLP official press release to diminish their new partner's name to a mere I. It just looked like someone wanted to dust that fact under the rug.

But how is this partnership even possible given U.S.-Iran relations? Well, there's a loop-hole:

The agreement falls within an exemption to the otherwise broad sanctions of the US against Iran. The US Department of Treasury’s regulations include a general license which “authorizes collaborating with “academics and research institutions” of sanctioned countries on the… creation and enhancement of written publications.”

The two research teams will collaborate on writing scientific publications about their joint discoveries on aneutronic fusion. The LLP [site] explains:

In the past three years, Iran has become a major player in the small but growing global effort to achieve aneutronic fusion power—controlled nuclear fusion using fuels that produce no neutrons. Controlled fusion harnesses the power that heats the sun--nuclear fusion--as a source of energy for peaceful purposes. Fuels that don’t produce neutrons are important because neutrons can be extremely destructive, damaging the structure of a fusion generator and inducing radioactivity.

...Fars News Agency reports that LLP's work could be a game-changer, if things go to plan: it's "one of several small companies that believe they can crack fusion far sooner than can ITER or the National Ignition Facility (NIF), another international behemoth, based in Livermore, California. "


Methinks that LLP's head of public relations is fielding some calls as we speak. If this report is accurate, LLP should consider relocating to Tehran to get all of the true benefits of their partnership.

These folks are all scientists. The citizens are ready for change and the scientist are interested in science. Iran has some good ones. lets try and remember the Iranian theocracy is the problem.

Not a scientific partnership that is a possible solution to Iran nuclear problem.

jdp. Your kidding right. There is no seperation between citizens and their rulers as far as information is concerned. Do you really believe a citizen scientist can somehow operate separate in a dictatorship.This is actually how liberals think. Co-operate with your enemies and hope for the best.

What specifically is Iran's nuclear "problem"? As far as I can tell, the only "problem" they have is their inability to destroy America, Israel, and any other nation that hare-lips them.

Let's try and remember that we want Iran to have this problem.

Let's remember that "aneutronic fusion" includes what used to be called "cold fusion."

Best of luck with that!