Until Barack Obama took office in 2009, the United States had never spent more than 23.5% of GDP, with the exception of the World War II years of 1942-1946. Here’s the Obama spending record:

What’s more, if Obama wins another term, spending—according to his own budget—would never drop below 22.3% of GDP. If that forecast is right, average spending during Obama’s eight years in office would average 23.6% of GDP. That’s higher than any single previous non-war year.

Yet financial columnist Rex Nutting of MarketWatch tries to portray the president as being downright stingy in a piece entitled, stunningly, “Obama spending binge never happened”:

Of all the falsehoods told about President Barack Obama, the biggest whopper is the one about his reckless spending spree. As would-be president Mitt Romney tells it: “I will lead us out of this debt and spending inferno.” Almost everyone believes that Obama has presided over a massive increase in federal spending, an “inferno” of spending that threatens our jobs, our businesses and our children’s future. Even Democrats seem to think it’s true. Government spending under Obama, including his signature stimulus bill, is rising at a 1.4% annualized pace — slower than at any time in nearly 60 years. 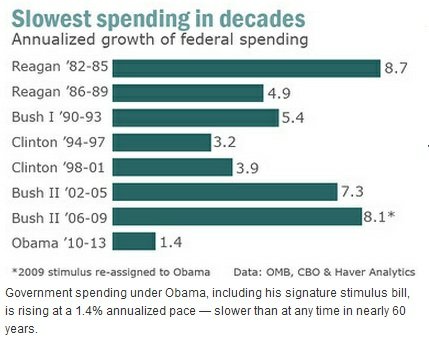 As the chart indicates, Nutting arrives at that 1.4% number by assigning 2009—when spending surged nearly 20%—to
George W. Bush...

Gee, last time I checked, Nutter -- if that is your real name -- George W. Bush wasn't the guy who jammed the Stimulus package through Congress, which was tacked onto the 2009 budget.

Here is another way Nutting could have framed the spending issue:

Da-yam, Rex: you gonna put some ice on that?

FDR may have taken a numerically larger piece of the pie, but it was a much larger and growing pie, while Obama has managed to take a high percentage of a smaller and shrinking pie.

And there is no comparison between the wars in Iraq and Afghanistan and WWII, which was truly a global war.

Umm, did you notice that the stimulus was included in the Obama figures?

"Government spending under Obama, including his signature stimulus bill..."

How about that asterisk? You know, the one that points to the following statement: "2009 stimulus re-assigned to Obama."

Basing your entire argument on statements that are directly contradicted by the original argument show that while someone may be a 'lying sack of s***," it isn't Rex Nutter.

Bush proposed and introduce he stimulus spending. Obama didn't try to stop it. Europe chose austerity rather than stimulus. The US economy is in better shape than all of Europe besides Germany. Could be both Obama and Bush were right about the spending. The pointless and expensive wars of the Bush era? Different story, eh?

Michael D Nichols said...
This comment has been removed by the author.
8:21 PM

Anonymous, The bill was introduced in the House as H.R. 1 by Dave Obey (D-WI) on January 26, 2009. Obama's inauguration was of course on the 20th. Both the House and the Senate versions of the bills were primarily written by Democratic Congressional committee leaders and their staffs. Because work on the bills started before President Obama officially took office on January 20, 2009, top aides to President-Elect Obama, not Bush, held multiple meetings with those committee leaders and staffers.
It's now an undeniable historical fact that's already in the record books.

I don't see how this blogger's points contradict Nutting's article. The chart showing debt as % of GDP is not indicative of Obama's propensity to spend, or overspend. Given the contraction in the economy, those percentages will be higher than normal anyway. Additionally, Mr Ross calls Nutting a lier because the 2009 spending (except for the stimulus) was credited to Bush. Is Nutting incorrect in stating that the 2009 budget was approved prior to Obama taking office?

Furthermore, the CBO numbers cited by Nutting seem correct compared to the publications on the CBO website. So what gives?

I will like to see a real rebuttal, not one based on obfuscation.

"2009 stimulus re-assigned to Obama."
Good grief...it would help if the "informed" were actually "informed".
Fed Spending 101 -
The federal government runs a fiscal year that begins 10/1 of a given year and end 9/30 the next. The fiscal budget year is the following calendar year. George W. Bush, being a two term President, is responsible for exactly 8 federal budgets: FY02 (10/1/01 through 9/30/02), FY03, FY04, FY05, FY06, FY07, FY08 and FY09 (10/1/08 through 9/30/09 - Yes...spending for the first nine months under Obama were allocated by Bush via FY09 budget).
The "Obama stimulus" was passed and signed Feb.17, 2009. 7 months worth of that spending occurred during the last 7 months of Bush's FY09 budget.
Would it be "fair" to tag Bush with all that spending allocated AFTER he left office? Of course not...so the "Obama Stimulus Spending" that occurred in FY09 was REASSIGNED TO OBAMA... without the reassignment Obama's average % growth is EVEN SMALLER NOT LARGER

"Given the contraction in the economy, those percentages will be higher than normal anyway." - Correct. The other bit of smoke and mirrors is to lump all Bush years into a single average and break Obama years out individually. As we now know, the recession began in Dec. 07. GDP contracted during '08 and '09, driving Bush's spending higher in terms of percent GDP. Adding in the 6 prior years with averages ranging from 19.1% to 20.1% of GDP artificially lowers Bush's record. Breaking Bush's last budget out, according to the CBO, Federal spending was 25.2% of GDP (including, I believe, 7 months of the "Obama Stimulus")..which of course would bring the "Obama bars" into visual alignment with the above 1.4% growth chart and thus defeat the purpose.

- Who refused to sign a budget in 2009 until Bush left office?
- Who signed the "Stimulus" package, added to the 2009 budget (and every budget since, thanks to a failure to pass a budget)?
- Who deficit-spent more than anyone in world history?
- Whose budgets put America on a path for catastrophe (trillion-dollar deficits from now until eternity) while rejecting even modest plans like the Ryan budget?
- Who jammed the largest entitlement program in world history (Obamacare) down the American people's throats without anyone reading the bill or understanding its impact?

That would be Obama and the rest of the Marxist Left.

Take pride in your shovel-ready failures! Revel in your collectivist stupidity!

Nutting's Marketwatch article is nothing but a steaming pile of misleading political junk.

Using the 2009 federal budget as the baseline for evaluating the %rise of federal spending under Obama and using that to favorably compare Obama to past presidents is the worst type of statistical lying. Clearly what was sold as a one time $800B stimulus has been in fact a 4 year $800/year stimulus. I'm not saying that it wasn't needed but no one can assert that the total federal budget stimulus since the financial crisis was only a one shot deal. It's really been more like $3.5T than $1T.

To make the kind of comparison Nutting is attempting in the Marketwatch article meaningful you would need to ignore the FY2009 transition budget & use FY2008 as the new baseline spending transition from Bush to Obama and then do the annualized spending % increase calculation from there.

While you are at it you might as well ignore all the election transition budgets to get a cleaner more useful set of stats.

Yes, I know you Republicans out there will argue this fact, but it still stand as just that: a fact. And, for those not keeping score, Congress has been majority REPUBLICAN during Obama's administration. So, when you are griping about Obama's spending, try to remember how it really works. The Republican majority in congress has been holding the purse strings, not Obama. Get your facts in order and try again.

@directorblue - Just heaps of no. Also, my name is Bret Londer, and my Blogger ID is bretlonder, and public. Yours is private, which is a synonym for anonymous. I will address your dumb points in their dumb order.

1) Your implication here is that non-President Obama was supposed to sign the Federal Budget while President Bush was in office. That's not possible. If you're referencing the $410 billion spending package that Bush wouldn't sign while in office, what your argument really needs to be is that President Bush is a shrewd politician. If he didn't believe in the bill, he would've vetoed it, but he wouldn't do that since it was developed under his Presidency.
2) Obama did add spending on top of the Bush-designed stimulus package. As others have correctly argued, and history supports, government spending is the most effective cure for slowing/falling economies. As economists are now saying, there needs to be MORE spending to resolve our current domestic economic situation.
3) Nearly EVERY President deficit spends more than anybody in history because aside from the Clinton era, we run budget deficits. At the time, Bush spent more borrowed dollars than any other President, as did his father, and as will every other President until we run a budget surplus again.
4) This is opinion, not fact, and worth only one response: Even fiscal conservatives would cringe at calling Paul Ryan's budget suggestions "moderate."
5) The Affordable Care Act is not the largest entitlement program in history. Medicare is 15% of the Federal budget, 20% goes to Social Security, and 13% goes to non-health insurance, non-Social Security assistance for people in economic hardship. As for the Act, let's assume that the CBO figures are hugely wrong. They estimate a net reduction of around $143 billion over 10 years. Let's pretend that it instead raises our spending by $100 billion a year over those 10 years. This is a number I pulled out of my butt just assuming that the CBO was hugely wrong, for your sake. At $25 billion a year, the Act still comes far shy of Medicare ($486 billion/year) and Social Security ($731 billion/year). That part of your argument is incorrect. In terms of nobody understanding the bill, I don't have anything to argue here since it's simply your word. My counter argument would be "yes, they do."

As for the rest of your blabber, I'll say that you have no idea what "Marxism" actually means, and the irony in your "collectivist" statement is delicious seeing as your points are exact copies of what every Republican Congressman is telling you to think.

As for the article itself, I have a hard time believing anybody who can't bother to correctly spell the name of the man he's haranguing throughout his entire article. The critics in this comment thread are spot-on with their criticisms of James Pethokoukis's (really, really hard not to type James Pathetic) use of smoke and mirrors. Politifact verified Nutting's numbers in response to his article, and the Washington Post and other outlets have weighed in. While they don't necessarily love the article, they haven't been able to dispute the core argument. The best that conservatives can come up with are rantings like this and some from that bastion of logic and reason Ann Coulter. In neither article can the author impune the numbers, just the logic behind them. Gonna rub some ice on that, Pethokoukis?

@bret, you're doing a wonderful job of rewriting history. couple of data points: the $840 billion stimulus, passed by obama after he entered office, has been built into the baseline budget every year since:

Thanks to the Democrats' failure to pass a budget.

As for Clinton's surplus: sure, he was arguing with the GOP-controlled House for smaller government. Right. You can thank 1994's sweeping elections and John Kasich in great part for those surpluses.

Plus a little thing called... the world-wide web (you may have heard of it) that would have happened even if an impeached pervert who sold missile secrets to the Chinese had been president.

Oh and @bret, as for marxism, i've written extensively on the topic. see the first story on the right (the fork in the road) or read this.