Google is in Washington this week, lobbying lawmakers to legalize its self-driving car:

Google is evidently taking its campaign to make its driverless cars legal on U.S. roads from state capitals to the nation’s capital. A Google robo-Prius was spotted last Tuesday roaming the streets of Washington, D.C., only a day after Nevada became the first state to legalize autonomous vehicles on the Silver State’s roads. 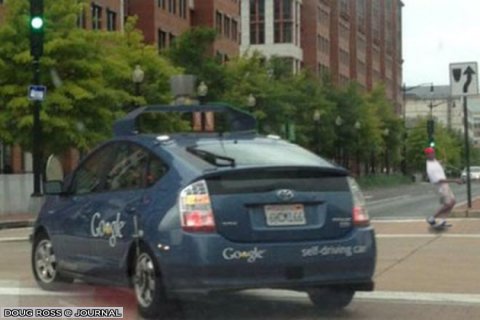 U.S. News & World Report speculated that Google was in town to appeal to federal policymakers, and possibly take them for joyrides in one of the company’s self-driving Prius hybrids. The outlet also noted that Google has racked up a reported $5 million legislative lobbying tab in the first quarter of 2012 alone – more contributed to candidates’ coffers in the same time period than Apple, Facebook and Microsoft combined.

I'll be frank. With this federal government -- and with this current crop of power-hungry politicians -- a self-driving car is one of the worst ideas I've ever heard.

In fact, it's a horrible idea.

• How long until government mandates self-driving cars, under the aegis of safety, fuel efficiency, traffic control or heaven knows what?

It never scales back. It never "right-sizes". It never strips away laws or shreds outdated regulations.

It grows, like weeds among ivy. And it always uses its growth to further undermine individualism, to erode the family unit, to sap faith, and to fortify the sovereignty of the government.

It's got money for drones to perform surveillance on American citizens, but no funds for sealing the border with Mexico or purchasing the fighter jets we'll most assuredly need now that Iran, China and Russia are on the rise.

All of these characteristics, I might remind you, are precisely what this country's founders attempted to avoid when they crafted the Constitution. And until we have a group of patriots in office -- meaning people who will adhere to the Constitution -- I will oppose any government-approved "self-driving car". For it rides on the road to tyranny.

There's a great number of driverless cars on ou roads already.
Texting while smoking. On the cell phone, making hand jestures and 'steering'? with their knees.

The left has always hated the ability of people voting with their wheels and leave the city.
This hate also comes from their HS days. They were driving Moms Volvo while the guy with the Camaro got the babes.

Driverless cars will be optional in a couple of years, but then they will become mandatory under the guise of "safety and security" once people have warmed up to them and they become more commonplace. But what if it gets hacked - remember the movie iRobot where his car's controls get tooken over? No matter how secure, it's always a possibility. Think of all the cars in the US being tapped into and crashing all at once.