It might concentrate the minds of reluctant Republicans wonderfully, and perhaps some Democrats as well, if they were subject to the rules and regulations of the rotting dead fish known as ObamaCare. Then they might see the pitfalls and hardships of their constituents who lost their doctors, lost their plans, have premiums larger than mortgage payments, and deductibles so high their insurance cards are worthless.

As Heather R. Higgins, CEO of Independent Women’s Voice and head of the Repeal and Reform coalition, notes:

If President Trump is serious about repealing ObamaCare—about delivering a better policy with more choice and lower costs—there’s a simple move he could make that wouldn’t require congressional approval. It would align the interests of lawmakers and their staffers with the interests of voters.

Congress is essentially unaffected by the high costs of the ObamaCare exchanges because of a special exemption crafted under the Obama administration. The Affordable Care Act required members of Congress and their employees to participate in the health-insurance exchanges it established. They should have lost the generous coverage they had in the Federal Employees Health Benefit Program and instead bought one of the government-mandated options offered on the ACA exchanges. 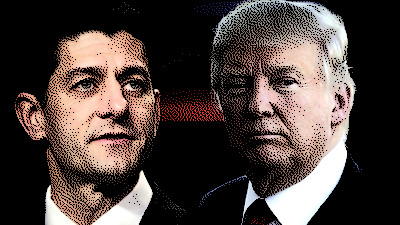 In late 2012, staffers and members figured out what was about to happen and begged the Obama administration for relief. Just as Congress was going into its August recess in 2013, the Office of Personnel Management ratified the fiction that the House and Senate each have fewer than 50 employees, and thus qualify as “small businesses.” That enabled OPM to establish a system of special subsidies and exemptions, sparing Congress the embarrassment of a self-serving vote.

Many staffers are exempted and allowed to remain on their old insurance plans. Members of Congress and their designated “official office” staff are insured through the District of Columbia’s small business exchange—but they receive a one-of-a-kind subsidy from their employer (taxpayers) of up to $12,000, or about 70% of their premiums.

Do as I say not as I do, says one of the largest collection of millionaires on the planet, including Republicans who voted repeatedly to repeal ObamaCare when they knew anything that did pass would be vetoed. Now these profiles in porridge have wimped out panicked at the prospect of actually KEEPING THE PROMISE THEY MADE THAT WON SUCCESSIVE ELECTIONS TO GAIN CONTROL OF THE House, the Senate, and the White House wher President Trump waits with “pen in hand”.

It didn’t occur to Republicans to just pass 2015’s HR 3762, the Restoring Americans’ Healthcare Freedom Reconciliation Act. Introduced by then-Rep. Tom Price, now HHS Secretary,  the bill passed the House on October 23, 2015 by a vote of  240-189.   The Senate, after making changes to make it more robust, passed their version  on December 3 by a 52-47 vote. A vote to override President Obama’s veto failed on February 2, but the onus was on him and the Democrats. Voters, knowing that a Republican President would have signed the bill, elected one, Donald J. Trump. So what’s wrong with reintroducing a bill that passed both the House and the Senate?

Granted, it was not a full repeal and place, but it was a better starting point than the Rube Goldberg legislation that just died in childbirth, doing many of the things everyone, including the Freedom Caucus, said they wanted:

It also included a measure to eliminate federal Medicaid funding for Planned Parenthood for one year. But it called for increasing funding for community health centers by $235 million/year for two years (a 6.5 percent increase over the currently scheduled funding).

The latest version which has passed the House is not a perfect repeal and replace, but it does have the Cruz amendment offering expanded Health Savings Accounts that could now be used to pay insurance premiums. It would allow insurance companies to sell plans tailored to consumer needs as long as they sold ObamaCare’s one-size-fits-all mandate laden policies. That would give consumers health care choices they can actually use. And if Sen. Rand Paul still thinks it is not the full repeal he seeks, then he can offer his repeal as an amendment on the Senate floor, can’t he?

But to focus their minds, subject these pompous bloviators to the rules and regulations of ObamaCarew. As the Club for Growth urged in a letter to President Trump:

On behalf of millions of taxpayers who are members and supporters of our organizations, we urge you to direct the Office of Personnel Management (OPM) to rescind the Obamaera rule (78 Fed. Reg. 60653-01) that allows Congress to masquerade as a small business in order to force taxpayers to pay for their health insurance.

This ongoing fraud improperly allows Congress and its staff to avoid the pain the Patient Protection and Affordable Care Act (“Obamacare”) is inflicting on millions of other Americans. When Congress was debating Obamacare, the American people demanded that Congress subject themselves and their staff to the new system they were imposing on their fellow Americans.

Those demands worked, and before Obamacare passed the Senate in 2009, Section 1312(d)(3)(D) was included. That section requires members of Congress and their staff to buy health insurance through an Obamacare exchange, and unlike an earlier proposed version does not authorize an employer contribution toward their premiums.

The provision was set to take effect in 2014, causing panic on Capitol Hill. Members of Congress and their staff were desperate to keep their taxpayer-funded, gold-plated health care rather than go into Obamacare and pay their own way, as the law required.

After a meeting with Senate Democrats in March 2013, then-president Barack Obama personally committed to illegally exempt Congress from this provision of Obamacare. And he did. Obama directed OPM to issue a rule purporting that Congress, which has thousands of employees, is a small business and therefore: “the DC Health Link Small Business Market administered by the DC Health Benefit Exchange Authority, is the appropriate SHOP from which Members of Congress and designated congressional staff will purchase health insurance in order to receive a Government contribution.”

Congress is not a small business and should not be exempt from ObamaCare. But ObamaCare is a plague on real small businesses, and large ones, on their customers, their employees, and the American people. If you don’t want to repeal and replace ObamaCare, Congress, why don’t you try living under it

Too bad McCain wasn't forced to use BarryCare. They'd have given him a lobotomy and sent him to a "Behavioral Treatment Center". That would have saved us from having to listen to him tell us how great he was.