From the fever swamps of the Left, the unsubstantiated, over-the-top Russian electoral collusion conspiracy theory now includes President Trump’s son who now stands accused of a 20-minute meeting with a Russian lawyer who allegedly has Kremlin ties.

This is merely the latest part of the Left’s rolling coup attempt against President Trump.

According to the New York Times, Natalia Veselnitskaya met with Donald Trump Jr. at the Trump Tower in Manhattan in June last year after his father had secured enough delegates to win the GOP presidential nomination. She got the meeting by claiming she had dirt on Democrat presidential contender Hillary Clinton.

The newspaper breathlessly added in a separate report that young Trump was sent an email by acquaintance Rob Goldstone cautioning that “the Russian government was the source of the potentially damaging information.” The paper acknowledged the email “does not elaborate on the wider effort by Moscow to help the Trump campaign.”

Nor is it clear if Trump Jr. read the email. Of course, the sources to the New York Times are not named. The newspaper adds:

There is no evidence to suggest that the promised damaging information was related to Russian government computer hacking that led to the release of thousands of Democratic National Committee emails. The meeting took place less than a week before it was widely reported that Russian hackers had infiltrated the committee’s servers.

The meeting was set up by Rob Goldstone, a music publicist, the Washington Post reports. Goldstone is involved with the Miss Universe pageant and manages Russian pop star Emin Agalarov. 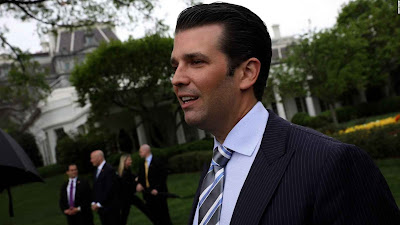 “President Trump’s eldest son, Donald Trump Jr., was promised damaging information about Hillary Clinton before agreeing to meet with a Kremlin-connected Russian lawyer during the 2016 campaign, according to three advisers to the White House briefed on the meeting and two others with knowledge of it.”

That’s it. A so-called scoop in journalistic parlance.

The Trump campaign apparently did nothing but listen to the woman.

Donald Trump Jr. now says the woman’s offer of opposition research on Democrat nominee Hillary Clinton and other Democrats was a ruse.

“After pleasantries were exchanged, the woman stated that she had information that individuals connected to Russia were funding the Democratic National Committee and supporting Ms. Clinton,” Trump Jr. told the Times. “Her statements were vague, ambiguous and made no sense. No details or supporting information was provided or even offered. It quickly became clear that she had no meaningful information.”

As Michael Walsh observes at the New York Post:

The real reason, it seems, was that Veselnitskaya wanted to lobby for the repeal of the Magnitsky Act, an Obama-era law that allows the US to deny visas to Russians thought guilty of human rights violations. In retaliation, the Russians promptly ended the adoption of Russian orphans by Americans.

Of course there is nothing illegal or even unethical about seeking out dirt on a political opponent, and the Trump campaign would have been foolish not to at least let Veselnitskaya explain herself in person. This is how opposition research is done in the great American experiment in self-governance.

But the New York Times is hell-bent on using wildly exaggerated claims and lies about President Trump’s connections to Russia to take down the president.

Having established the smear of “collusion,” the Times must now link every story with the word “Russia” to it in the hopes that the rubes and suckers won’t stop believing that Trump somehow cheated his way into the White House.

This thing called “collusion,” by the way, isn’t a crime. Merely talking to someone who may be an agent for a foreign government isn’t illegal, at least not yet, because America’s First Amendment protects free speech, and most emphatically, political speech.

“There is not a clear criminal act in such a meeting based on the information that we have,” Turley writes. “Moreover, it is not necessarily unprecedented.”

There is no crime in listening to people who say that they have incriminating information on a political opponent, even a foreigner. Article III defines treason as “levying War against [the United States], or in adhering to their Enemies, giving them Aid and Comfort.” To say that this type of meeting even borders on treason is quite a departure from the language and cases governing that crime.

Moreover, it is hardly shocking to see a willingness to gather dirt during that election.  Hillary Clinton was repeatedly criticized for her close association with figures like David Brock who was denounced even by John Podesta as sleazy and disreputable. There was also Sidney Blumenthal who was regularly denounced for spreading rumors and dirt against anyone threatening Clinton.

Besides, no one “colluded” more with Russia more than President Obama.

Obama worked “behind the scenes for months to forge a new working relationship with Russia, despite the fact that Russian President Vladimir Putin has shown little interest in repairing relations with Washington or halting his aggression in neighboring Ukraine,” Bloomberg News reported in 2014.

Obama advanced Russia’s interests in so many ways.

In 2009 Obama killed President Bush’s missile defense program for the Czech Republic, Hungary, and Poland. Then he renegotiated the New START nuclear arms agreement, which curbed the U.S. missile defense arsenal while letting the Russians add to theirs. In March 2012 Obama was caught on an open microphone telling then-Russian President Dmitri Medvedev to wait until after the upcoming election when he would be able to make even more concessions on missile defense. As Russia engaged in what one expert called the largest military buildup since the collapse of the Soviet Union, Obama flipped off Mitt Romney during a presidential debate. After Romney on the campaign trail referred to Russia as “without question, our No. 1 geopolitical foe,” Obama mocked him, saying “the 1980s are now calling to ask for their foreign policy back.” And Obama did virtually nothing but talk when Putin invaded Ukraine.

Obama was the most pro-Russian U.S. president of all time, which makes the Left’s conspiracy theory about President Trump’s collusion with Russia seem especially far-fetched.

And so the Trump Derangement Syndrome festers on as the Left continues to find itself unable to accept the results of the November election.

More ridiculous, desperate accusations against Trump officials are bound to come our way.