The former Soviet Union possessed many imaginative mechanisms to deal with the problem of enemies of the people who obstructed the path to socialist utopia -- now known as “social justice.” One of those mechanisms was the practice of confining individuals who were thinking the wrong thoughts to insane asylums. Indeed, if you caused any trouble for the commissars, a good inoculation of neuroleptics (powerful drugs used to “quiet” the symptoms of schizophrenia), forcibly administered through a tube in the nose, could do wonders in bringing your politically incorrect behavior to a halt.

Dissidents such as Natalya Gorbanevskaya, Pyotr Grigorenko, Vladimir Bukovsky, Alexander Esenin-Volpin and Joseph Brodsky were all among the brave freedom-fighters who bore the brunt of the Soviet practice of institutionalizing dissidents in mental hospitals and force-feeding them mind-shattering drugs.

Gorbanevskaya was committed to a psychiatric hospital for attending the 1968 Red Square demonstration against the Soviet invasion of Czechoslovakia. Grigorenko suffered the same fate for criticizing the Khrushchev regime. Bukovsky was confined to a psychiatric hospital for “anti-Soviet agitation.” Brodksy was sent to mental hospitals for not writing the right kind of poetry; his treatments involved "tranquilizing" injections, sleep deprivation and forced freezing baths. Esenin-Volpin was institutionalized in the Leningrad Special Psychiatric Hospital for his anti-Soviet thoughts. 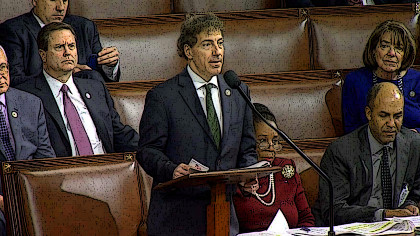 Today’s progressive Democrats are also faithfully journeying on an uplifting odyssey. Horrified by Trump’s opposition to Obama’s “fundamental transformations,” they have found their own neuroleptics in the form of the 25th Amendment and a bill seeking to impeach the president for being mentally unsound. Indeed, Trump has to be mentally deranged and unfit for office, because what other reason could possibly explain his frightening disagreement with the Left’s un-American creed of identity politics -- race and gender uber alles? What other factor could possibly be at play in his embrace of individual freedom and responsibility -- and in his rejection of group privileges and racial/gender hierarchies that, as David Horowitz has noted, can only be manifested after America’s Constitution is null and void?

Confronted by Trump’s shocking blasphemy against their anointed plan, several Democrats, led by Rep. Jamie Raskin (D-Md.), have now signed onto a bill that seeks to remove Trump by invoking 25th Amendment powers. The bill cites section 4 of the amendment, created in 1967 after JFK's assassination, that allows for an independent body to remove the president based on the determination that he has been mentally or physically incapacitated to carry out his duties. Raskin's initiative would activate a probe into whether Trump has been too far "incapacitated" to continue as president.

This effort is, actually, even sicker than the Soviet practice, since the amendment does not refer to psychiatric problems, but to actual incapacitation through assassination or stroke.

Raskin claims he is concerned that "something is seriously wrong" with Trump, citing a "sustained pattern of behavior" and several "errant and seemingly deranged tweets," which he believes are damaging to U.S. interests. But to anyone who hasn’t drunk the progressive Kool-Aid, it is obvious that Trump’s sustained pattern of behavior is not damaging U.S. interests. Instead, it is unhinging his political enemies and damaging the progressive assault on America’s social contract. Trump’s tweets do not warn, for example, that the future must not belong to those who slander the prophet of Islam (an Obama meme) or that you can keep your doctor if you like him. They are singing the praises of America and calling out a corrupt media for its brazen lies and political partisanship.

The only reasonable observation in Raskin’s statements is that (to people like him): "it certainly doesn't feel like the ship is on an even course right now."

Consequently, the Democrats are now trying to steer the ship back into progressive waters. They are doing so by applying the lessons of the Soviet secret police -- in quashing those who disagree with them like Andrei Sakharov. Sakharov refused to toe the Soviet party line and be politically correct; therefore, like Trump, he was also obviously mentally ill. That’s why the Soviet authorities had to confine him in a closed ward of the Semashko Hospital in Gorky, where he was force-fed and given drugs to alter and enlighten his state of mind.

And now enter the new self-appointed social redeemers of our time: the progressive Democrats who are consumed with ferocious rage as they watch the horror show of an American president strengthening America and abandoning the enlightened course on which Obama’s ship sailed. There is no secret about what the true yearnings of the Raskin Gang are, but absent a totalitarian state to back them up, they are bound to fail.

even with winning it would be nice to slaughter some democrats and their kin.