Exercising the freedoms of speech and press that so many have given their last measure of devotion for, Chicago Tribune contributor Diana Goetsch has penned an op-ed defending disgraced and unemployed former NFL quarterback Colin  Kaepernick and his infamous taking the knee during the national anthem. Not stopping there, Goetsch goes on to slam the national anthem as a “pompous battle number” that wasn’t played before sporting events until 1942 in the dark days of World War II.

One wonders if Goetsch has pondered the possibility that were if not for the sacrifice of veterans during World War II, she just might be plying her trade writing her tirades in Japanese or German.

But the flag  the national anthem celebrates was raised at Iwo Jima and never stopped flying at Bastogne during the Battle of the Bulge.  . 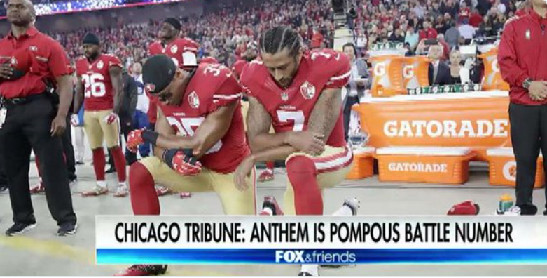 Let us make the obligatory stipulation that both Kaepernick and Goetsch have the right to express their opinions through their actions and words. But they have the obligation to appreciate that this and other rights came at great expense in blood and treasure. Men, and women, have died or been maimed for life to protect the right of Leftist kooks to be obnoxious and insensitive to the heroic sacrifice of others. As Aaron Bandler writes at the Daily Wire:

Diana Goetsch and her ilk are free to exercise their freedoms but they are not free to forget where those freedoms came from and who fought and died for them. She’s a grand old flag. Let’s honor her and what the flag reprsents every chance we get.

A woman who has sacrificed nothing, who knows the price of everything and the value of nothing demonstrates why the media enjoys the same esteem as dog nabbers. Well I should apologize to diog robbers, you're not as evil as this woman nor as stupid.

A cranky white lib tranny (really, is there any other kind?) who has sacrificed nothing and who knows only the value of a giant bagodix. #FIFY

This is what happens when children are raised without discipline, when everybody is right, when everybody gets a trophy. There is nothing outstanding in those lives, they are lost. So they look for a "cause," something that can "mean something" to them. We started in Berkeley (OKA Berzerkeley) with the SDS (I was a medic at the free clinic, treated people hurt in the riots)...and it has progressed from there to POLITICAL CORRECTNESS...and antifa. This woman is the product of the upbringing (or lack thereof) of her generation. If she had any native intelligence, she would be an overcomer...and would not be writing trash like this.