LIMBAUGH: "It is the End of CNN"

I think it was last week or the week before, I forget which, but I openly stated on this program that we are witnessing the decline and eventual demise of CNN. And that statement was picked up by several in the Drive-By Media, and panels were assembled to discuss my premise. “Do you really think,” it was asked on Fox News, “do you really think this could be the end of CNN?” It is the end of CNN. 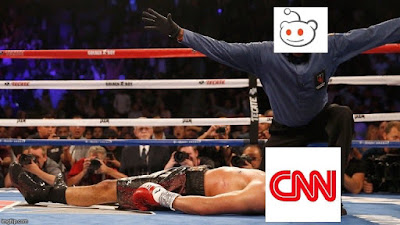 It was never gonna be pretty. It was never going to appear rational or normal. I mean, this is a huge battle taking place that Donald Trump is waging single-handedly. Now, he’s got his supporters out there, don’t misunderstand. The social media army is out there supporting, and he’s not alone in this. But in terms of electoral politics he pretty much is alone in this, and he continues to take it to them. And they clearly do not know how to deal with Trump.

When I saw this, I was jealous. I was jealous that I didn’t do this. The video of Trump body slamming a CNN logo. I said, “This is great.” Trump didn’t do it. He just retweeted it. But it was clever, it was funny, and it illustrated once again that modern-day journalism and modern-day liberalism have zero sense of humor. The serious outrage that this was met with is highly illustrative of just where modern-day liberalism is and who they really are.

I mean, CNN literally went bat crazy over this. They were acting like this is a direct assault on all members of the media. This is promoting violence against the media. Meanwhile, the only people being shot out there are Republicans. The only people being shot are Republicans, and they are deranged supporters of liberals like Bernie Sanders and Hillary Clinton, and they are listening to all the rhetoric that the Drive-By Media, including CNN, is using to make them insane, to rev them up.

Here comes a guy on our side of the aisle using clever satire and parody, putting the CNN logo over the face of Vince McMahon, a video tape of Trump at a Wrestlemania a long time ago, CNN logo. (laughing) CNN can’t take it. CNN goes bonkers, claiming that this is going to cause violence against journalists. Meanwhile, the only violence taking place is against Republicans, and it is with guns, and it’s being perpetrated by deranged followers of left-wing news such as CNN, the New York Times, the Huff and Puffing Post, you name it.

I thought it was hilarious and funny. But it made some people nervous is my point. I saw a lot of people over the weekend and they said, “It’s just not presidential.” I said, “Look, the problem is Trump didn’t start this.” And I reminded every one of these people how every time I’ve talked to them over the years, at one point or another there’s widespread complaining about the media. And there’s always somebody in the group, “Somebody’s gotta do something.” Well, somebody is. And this is what it looks like.

This is exactly what it looks like, whether you’re taking on the media or whether you’re taking on any other branch of the Washington ruling class or establishment. I think while people are aware of the dislike and the unpopularity of establishmentarians of Donald Trump, I don’t think people have a full-fledged correct understanding of the sheer, raw hatred for Trump that they have. And that kind of hatred that they are carrying with them every day is dangerous. It’s destructive. It’s distorting. It is almost dehumanizing in a way.

I think Rush is spot on. And Go President Trump! Keep taking it to them.

I'm really rolling on the floor laughing my a** off at the hypocrisy. They make every excuse for whatshername Griffin (I never had heard of her before this). CNN sponsors a play assassinating Trump and then has the audacity to get worked up over a gif?