RUSSIA? No, It was the Democrats and their Rogue IT Staffers Who Subverted Our Democracy

Democrats are the party that think the electoral college is undemocratic but that unelected super-delegates representing party bosses are just fine. They have already forgotten how former DNC Chair Debbie Wasserman Shultz tipped the scales for Hillary Clinton over a surging Bernie Sanders. She interfered in the 2016 election in ways Vladimir Putin couldn’t even dream of and arguably changed at least the Democratic Party results and campaign timeline.

In all the discussions of the Russians or their operatives hacking into the DNC and exposing the emails documenting DNC corruption and collusion with a single candidate, Hillary Clinton, the content of those emails are shoved aside. The emails documenting subversion of our democracy by Democrats, revealed by Wikileaks, were  written by Democrats, not  Vladimir Putin:

Schultz said she would step down after the convention. She has been forced to step aside after a leak of internal DNC emails showed officials actively favoring Hillary Clinton during the presidential primary and plotting against Clinton’s rival, Bernie Sanders….

The Sanders campaign has long claimed that the party establishment had its “finger on the scales” during the bitter and surprisingly long primary, but the embarrassing new revelations proved to be the final straw for a figure who had been a lightning rod for tension within the party.

The Russians may or may not have been involved, but in this context perhaps they should be considered whistleblowers and not hackers. It’s like someone breaking into a house only to find a murder scence. They can be accused of burglary but not the murder. Still the Russians were an easy diversion: 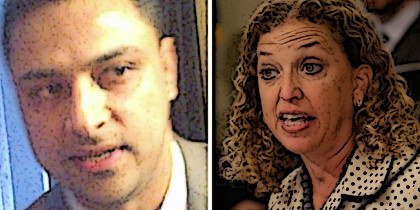 Hillary Clinton’s campaign has accused Russia of meddling in the 2016 presidential election, saying its hackers stole Democratic National Committee (DNC) emails and released them to foment disunity in the party and aid Donald Trump.

Clinton’s campaign manager, Robby Mook, said on Sunday that “experts are telling us that Russian state actors broke into the DNC, stole these emails, [and are] releasing these emails for the purpose of helping Donald Trump”….

Emails released by Wikileaks on Friday showed members of the DNC trading ideas for how to undercut the campaign of Senator Bernie Sanders, who proved a resilient adversary to Clinton in the Democratic primary. In one email, a staffer suggested the DNC spread a negative article about Sanders’ supporters; in another, the DNC’s chief financial officer suggested that questions about Sanders’ faith could undermine his candidacy.

So what the Democrats accused the Russians of doing, Debbie Wasserman Shultz’s DNC was actively doing. And considering what we have found out about the Pakistanis, not the Russians, that were brought in to run their IT operation, it makes sense as to why the DNC refused to turnover their servers to FBI forensic investigators, something which may now change. What else where they trying to hide?

Robert Mueller’s appointment as special counsel of the Russia election interference probe presents an opportunity for the FBI to inspect the Democratic Party computers that U.S. intelligence concluded were penetrated by Kremlin-directed hackers, cybersecurity analysts say.

The Democratic National Committee did not allow the FBI to physically inspect its machines, including servers. There is no public indication that any government agency has ever looked at the machines, prompting some former intelligence people to question the findings….

After former Homeland Security Secretary Jeh Johnson told Congress that the DNC had refused his agency’s assistance, Mr. Trump sent out a tweet: “Why did Democratic National Committee turn down the DHS offer to protect against hacks (long prior to election). It’s all a big Dem HOAX!”

Maybe not a hoax, but certainly a cover-up which included Debbie Wassrrman Shuklt’s curious relationship with Pakistani Imran Awan.

Awan was the top IT aide to Democratic Rep. Debbie Wasserman Schultz. The FBI reportedly “seized smashed computer hard drives” from his home. He was “arrested trying to flee to Pakistan after wiring almost $300,000 to the country,” according to The Daily Caller, which has owned the story because it does actual news reporting.

Here’s an amazing paragraph from the Caller: “Awan and members of his family received $4 million from the Democratic congressmen they were working for since 2010. Wasserman Schultz has been especially uncooperative with the probe into her staffers and even threatened the Capitol Police chief for gathering evidence. She refused to fire Awan until after he was arrested, even though Capitol Police had already revoked Awans’ access to the congressional IT system in February in relation to a major security breach.” ($4 million, and you wonder where your tax dollars go.)

Why was Awan kept on after other Democrats canceled his services? Smashed computer hard drives? Where, oh where, have we seen that before?  What other computer systems in and outside of Congress did Awan and his associates have access to? Could it be that Awan and not the Russians leaked the DNC emails to Wikileaks, possibly for cash?  Some have raised that possibility:

“Well, now you have a possible suspect,” Rivera said (see video below starting at 2:11). “Here’s the corrupt IT guy standing on the shoulders of Debbie Wasserman Schultz arrested at the airport trying to flee, charged with stealing hundreds of thousands, maybe millions, of dollars.”

Rivera continued: “What if he was the source to WikiLeaks? He has all the passwords. He has all the information. This is a huge story … Everyone assumed it was the Russians who hacked the DNC and then gave WikiLeaks the emails.”

Hannity reiterated that Wikileaks founder Julian Assange repeatedly assured him that — contrary to liberal media narrative — Russia was not the source of the leaked DNC emails.

The damaging internal emails showed the DNC and Wasserman Schultz had colluded with Hillary Clinton‘s campaign to make sure she won the Democratic presidential nomination over Bernie Sanders, whose unexpected popularity almost toppled Hillary.

“Assange told me personally five times that it wasn’t a state or Russia,” Hannity said, adding that WikiLeaks has not once been proven wrong in its 11 years in existence.

Interestingly, as the Daily Caller reports, Imran Awan’s lawyer, Chris Gowen,  is a long-time associate of both Bill and Hillary Clinton who has done work for the Clinton Foundation, used as a pay-for-play cash cow for the entire Clinton family. Interestingly, Gowan has raised the specter of anti-Muslim sentient in the Awan case:

Gowen described Awan’s arrest as “clearly a right-wing media-driven prosecution by a United States Attorney’s Office that wants to prosecute people for working while Muslim.”

Gowen is a founding partner of Gowen, Rhoades, Winograd and Silva law firm, with offices in Washington, D.C., and Philadelphia, Penn.

His official bio on the firm’s web site notes that he “left the Public Defender’s office to work for former President William Jefferson Clinton and then-Senator Hillary Clinton. Chris was a fact checker for President Clinton’s memoir, My Life.”

“He also served as a traveling aid for President Clinton’s national and international trips. Chris finished his tenure with the Clintons by directing the advance operations for then-Senator Hillary Clinton during her 2008 presidential campaign.”

Conservative Review — which first reported Gowen’s extensive Clinton connections Wednesday — said they also include work for the Clinton Foundation and its Clinton Global Initiative and the Clinton Health Access Initiative.

Maybe birds of a feather really do flock together. Maybe Hillary Clinton’s layers and donors on Mueller’s staff are aware of this?

Be that as it may, Debbie Wasserman Shultz and the DNC subverted our democracy in 2016, not the Russians. Will Special Counsel Robert Mueller actually look into this or will his team of Hillary lawyers and Democratic donors continue in hot pursuit of Trump son-in-law Jared Kushner? Perhaps if Kushner had smashed his hard drives and phones, deleted 33,000 emails, and tried to leave the country, the media and Democrats would have lost interest. Then he would be acting like any other holier-than-thou Democrat.

Daniel John Sobieski is a free lance writer whose pieces have appeared in Investor’s Business Daily, Human Events, Reason Magazine and the Chicago Sun-Times among other publications. Read more at BadBlue.com.