New reports from the non-partisan Pew Research Center confirms what everyone knows. Namely, MSNBC is in the tank for Barack Obama. And the statistical techniques used by the Center reveal that Fox News has the most balanced coverage of the presidential election. 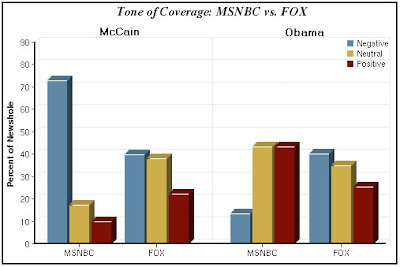 On Fox News, in contrast, coverage of Obama was more negative than the norm (40% of stories vs. 29% overall) and less positive (25% of stories vs. 36% generally). For McCain, the news channel was somewhat more positive (22% vs. 14% in the press overall) and substantially less negative (40% vs. 57% in the press overall). Yet even here, his negative stories outweighed positive ones by almost 2 to 1.

...[the] study found that in the media overall -- a sample of 43 outlets studied in the six weeks following the conventions through the last debate -- Barack Obama's coverage was somewhat more positive than negative (36% vs. 29%), while John McCain's, in contrast, was substantially negative (57% vs. 14% positive). The report concluded that this, in significant part, reflected and magnified the horse race and direction of the polls.

In related news, day will be followed by night later this evening.

Update: NBC's SNL shreds the unhinged Keith Olbermann. Keith, they're not laughing with you. They're mercilessly laughing at you.
at 7:05 AM
Email ThisBlogThis!Share to TwitterShare to FacebookShare to Pinterest
Labels: Democrats, MSM, Obama

the title of this article is misleading. they just showed that msnbc MIGHT be biased. you could say that conservative bias from fox equally affected the outcome of the election.