Despite his successful effort to register tens of thousands of voters this summer, President-elect Obama might not have won North Carolina without the state's new law allowing same-day registration and voting before Election Day.

Obama took North Carolina — the first Democrat do to so in more than three decades — by an unofficial margin of 13,692 votes... 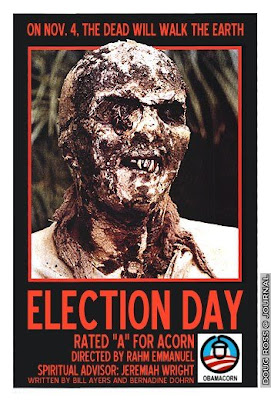 Nearly 92,000 new voters registered during the early voting period, which opened after the registration deadline for Election Day voting had passed. And those voters, according to an Associated Press review of registration and exit poll data, were a huge well of support for the Illinois senator...

Anyone care to guess how many were felons, illegal aliens and the dead?

Mainstream media? Helloooooooo...? Is this thing on?
at 9:45 PM
Email ThisBlogThis!Share to TwitterShare to FacebookShare to Pinterest
Labels: Crime, Democrats, Vote Fraud