Obama vs. Pelosi? Yes, we hope. 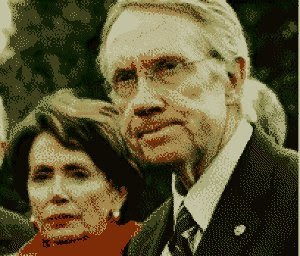 Pollster Doug Schoen, who helped Bill Clinton win re-election in 1996 over overwhelming odds after the 1994 Democratic debacle, recently warned in a Journal op-ed: "If the Democrats govern as if there is no Republican Party, they are likely headed to the kind of reaction that Bill Clinton faced when he made the same misjudgment after the 1992 election victory." Mr. Schoen cites specifically a meeting in Little Rock after the election with Senate Majority Leader George Mitchell and House Speaker Tom Foley, when Mr. Clinton agreed to defer to Congress on key elements of his legislative agenda. The subsequent lurch to the left did incalculable damage to his presidency.

That may be one reason why Mr. Obama has chosen Rahm Emanuel, a respected member of the Congressional leadership, to become his new White House Chief of Staff. Mr. Emanuel has a reputation as a tough partisan, but he has also exhibited impatience with left-wing members of his party who have overly ambitious ideological agendas. A likely first assignment for Mr. Emanuel will be reminding House Speaker Nancy Pelosi and Senate Majority Leader Harry Reid that, after only two years of Democratic control, Congress already has a lower approval rating than even President Bush's.

Mr. Fund's a bright guy, but I'll believe that the P-E has abandoned the hard left agenda when I see it.

Related: Memeorandum has more.
at 11:07 AM
Email ThisBlogThis!Share to TwitterShare to FacebookShare to Pinterest
Labels: Democrats, Obama, Pelosi, Red