Diamond in the rough


Back in the seventies, when I was a kid, my Dad used to take my brother and I on baseball trips. We would visit Cincinnati, the closest big league city to our tiny town. It was about a three hour drive, but worth every minute. 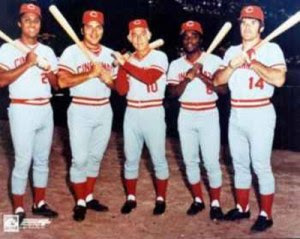 At that time the Reds were the dominant team, as powerful as any club that ever donned uniforms. The Big Red Machine, as they were known, won a couple of World Championships in a row including a sweep of Billy Martin's Yankees in '76. The '75 team had a streak where they went 41 and 9, which could be the best 50 game record in history.

If time permitted, we'd take side-trips to baseball shows. Now, back in the seventies, the baseball show business wasn't nearly the production it is today. In those days a bunch of card-sellers would rent out a Holiday Inn banquet room, set up some tables, and sell whatever memorabilia they could get their hands on. There weren't any celebrities or former athletes at these venues. It was just for collectors and, at that, mostly card collectors. 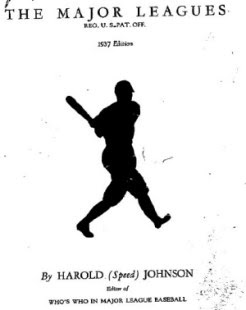 My brother and I were paper boys at the time and and we took the 30 or 40 bucks we'd saved up to find some gems. Because the good cards were too expensive for us -- even then a nice Mantle card probably cost a hundred bucks -- we'd find other stuff to buy.

For that reason we gravitated toward baseball books. The old Who's Who in Baseball, which listed all of the active players each year. The Baseball Record Books, published by the Sporting News. And the (now) humorously named Baseball Dope Books, which had all sorts of information on every club in professional baseball, even the minor leagues.

In those days I might spend as much as seven bucks on a book, although that was rare. I think one of my seven dollar purchases went to secure a 1934 Record Book, a tiny little pocket-sized thing in excellent condition.

I also found some interesting old books from the early twentieth century like the Baseball Cyclopedia (the first encyclopedia of baseball, supposedly). The oldest one of those I have is from 1909. 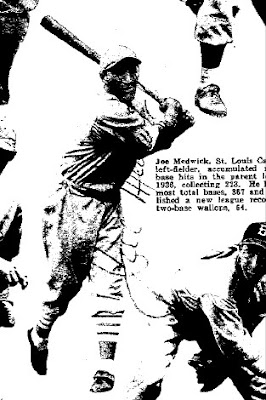 Hall-of-Famer Joe Medwick
Anyhow, we found the gem of all gems in maybe '73. My Dad liked the old Who's Who editions from the thirties and forties. If I recall, he needed a 1937 to round out his collection. We finally located one at a show held at the Holiday Inn in Sharonville, Ohio. I think I actually found it. It was crammed into a pile of musty programs, scorecards, guides and such in a godforsaken corner of the "show". 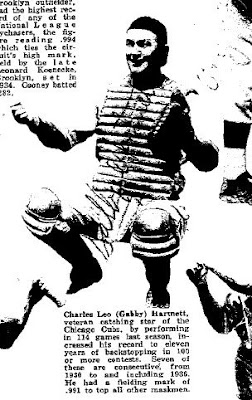 Hall-of-Famer Gabby Hartnett
My Dad offered three bucks for it. The dealer asked for seven. He said that if you opened up the book to the first -- inside cover -- page, there were a couple of no-name autographs in it. Sure enough, a couple of guys I'd never heard of had scrawled their names on the inside cover. I think they finally settled on five bucks and we threw the book into a bag with the rest of our purchases. 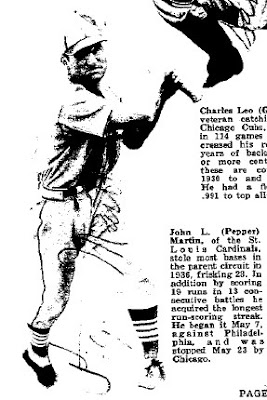 World Series Hero Pepper Martin
At some point later we were lolling around the hotel room, my Dad snoring with his fingers laced and the TV droning. I grabbed the '37 Who's Who and started flipping through the pages. 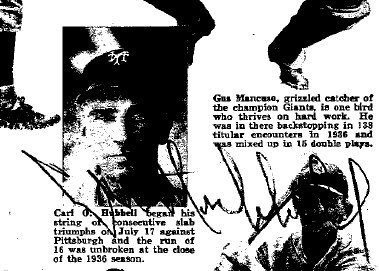 Hall-of-Famer Carl "The Meal Ticket" Hubbell
Hey, there was another autograph on one of the inside pages. And another! Then a couple of more. Three and four on some pages. They were scattered throughout the book like pebbles kicked onto a sidewalk. In random places with Hall of Famers and scrubs alike. 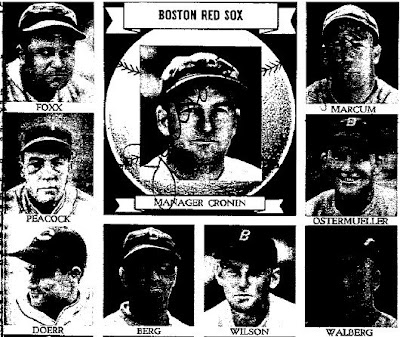 Hall-of-Famer Joe Cronin
All told there were roughly 110 autographs including a couple that are, to this day, unrecognizable.

Near as we could tell, the book was owned by a kid -- we think in Chicago -- who took it to a bunch of home games. He would stand by the visitor dugout and yell for autographs before the game. Players and managers alike would oblige, sometimes in the right place (over their picture), sometimes anywhere in the book.

It's a veritable treasure trove of National League autographs from that era.

What's it worth? No idea, but the story is priceless. 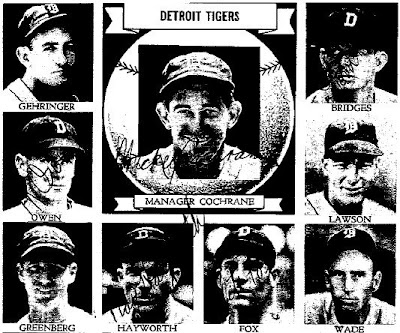 Hall-of-Famer Mickey Cochrane
My Dad's bringing the book into town for his visit this Thanksgiving and we'll check it out, reminisce and then toss it into the fireplace, kinda like Rose throwing the Heart of the Ocean away in Titanic.

Just kidding. We won't be throwing it into the fireplace. It's a keeper.

I've included some crappy scans that were faxed to me a while back. When my Dad comes up I'll try to get some better copies. In the meantime, imagine the musty smell and the joy of a little kid finding a book with history literally etched into its yellowing pages.

A typed list of autographs found in the book

at 9:30 PM
Email ThisBlogThis!Share to TwitterShare to FacebookShare to Pinterest
Labels: Sports, Water-cooler