The time for public comment regarding the EPA's proposed carbon emissions regulations is drawing to a close. Friday, December 28th marks the end of the comment period and it's imperative that you, your friends and family tell the EPA no to more regulatory regimes that are categorically insane. 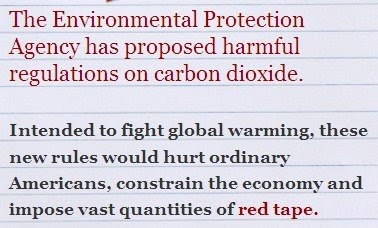 In a spate of sheer lunacy, the EPA is proposing immense new regulations aimed at suppressing carbon dioxide. You know, the gas that we exhale and that plants inhale. The key to photosynthesis. And the gas that humans are responsible for -- at the very high end of the most liberal estimate -- 3% globally.

The EPA wants to label Carbon Dioxide a pollutant. Visit http://stopEPA.com and send the EPA a message.

That is, unless you want to slap huge taxes on energy, kill hundreds of thousands of more jobs, and expend billions in taxpayer dough fighting a non-existent threat called "global warming" (I thought they were calling it "climate change", by the way, since we just had one of the coldest snaps in history).

Linked by: Ace o' Spades and Fausta. Thanks! Hat tips: STACLU and Larwyn.
at 6:15 AM
Email ThisBlogThis!Share to TwitterShare to FacebookShare to Pinterest
Labels: Climate, Democrats