Bail out the UAW for the bargain price of only $500 billion!


The average American worker makes $25 an hour in wages and benefits or roughly $45K per year. 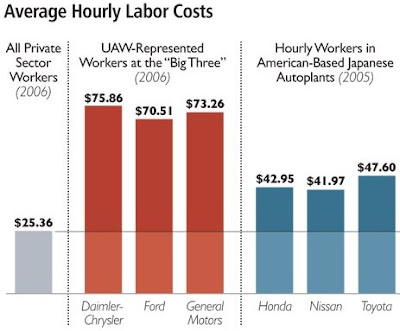 The average American worker employed by Honda, Nissan and Toyota makes $45 an hour in wages and benefits, which translates to $80K a year.

But each UAW worker earns $75 an hour in wages and benefits, or roughly $130K a year. 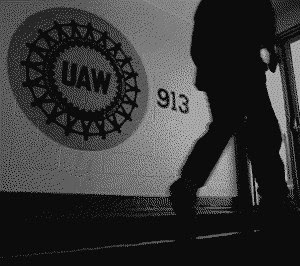 Health care costs are far higher for GM, Ford and Chrysler than for other companies. For example, full medical, hospital, surgical, and prescription drug coverage (including even Lasik eye surgery) costs GM workers and retirees $10 a month ($21 a month for families). 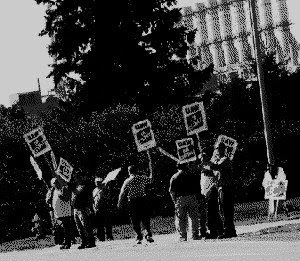 The UAW's platinum health benefits add $1,200 to the cost of each GM, Ford and Chrysler vehicle produced in the U.S. 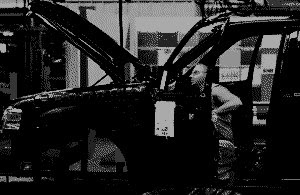 Thus, every vehicle made in Detroit carries a $700 to $1,000 UAW healthcare tax for benefits far, far beyond what most Americans receive.

Other benefits include 7 weeks of paid vacation for tenured workers. 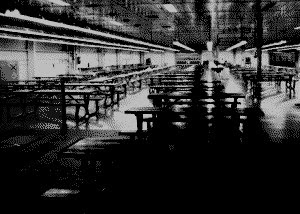 And when a plant closes, UAW workers are not laid off. Once they exhaust unemployment benefits, they are transferred to company-funded "Jobs Banks" and paid 95% of normal wages not to work.

To make matters worse, the three automakers must also come up with $60 billion in cash by 2010 to fund a revamped healthcare program that will be managed by -- wait for it -- the UAW.

Given that the three Detroit automakers are essentially penniless, it's certain that any bailout won't stop with $25 or even $50 billion. You can be absolutely sure that taxpayers will be stuck with the entire $60 billion UAW healthcare bill, which will provide medical benefits far richer than those provided by the woefully underfunded Medicare program. 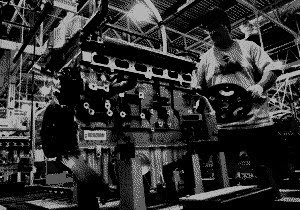 In 2006 the Harbour Report -- a benchmarking study comparing domestic auto manufacturers with their foreign counterparts -- estimated that GM lost $2,500 on every vehicle sold in the U.S..

I don't care if Washington redistributes $500 billion of the taxpayers money and "gives" it to the auto companies.

It won't work. These companies are fundamentally broken. The only answer is bankruptcy and reorganization. Any other approach simply delays the inevitable and wastes hard-earned taxpayer dollars. 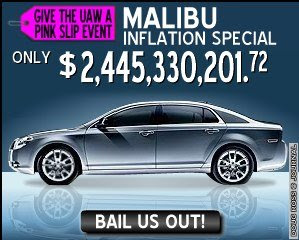 Linked by: Memeorandum. Thanks!
at 7:41 PM
Email ThisBlogThis!Share to TwitterShare to FacebookShare to Pinterest
Labels: Autos, Economy, Unions