If there's an upside to the stock market meltdown (formerly known as Obama's "Age of Plenty") it comes in the form of devastating news for the New York Times.

QandO points us to a shocking analysis of the Times' balance sheet. 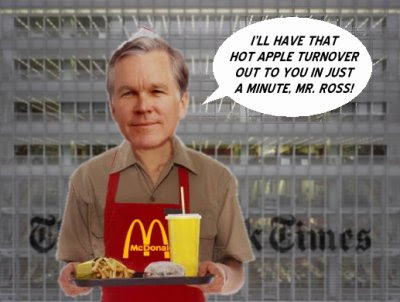 Worse yet, total advertising revenue for the newspaper industry -- of which the Times is a bellwether -- was expected to drop 11.5% this year. It could be decidedely worse given the current state of affairs.

To add insult to injury, The American Thinker's Ed Lasky spotted a spate of short-sellers seemingly placing bets against the very survival of the Times.

Perhaps Executive Editor Bill Keller should rehearse his next public statement: "Would you like to super-size that value meal?"