The circus called: they want their tent back


Hillary made an appearance at the Glamour Awards earlier this week. 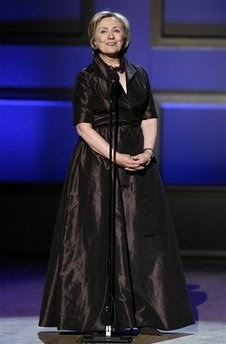 The 101st Airborne called: they want their parachute back.

Gateway Pundit captioned it: " Hillary Hangs Up the Pantsuit -- She decided on the yard bag instead."

Sweetness & Light asked the question on everyone's mind: [Speaking of "thunderous applause"]... Should they use “thunderous” in any article extolling Mrs. Rodham’s “glamour”?"

In retrospect, I really, really liked the pantsuits. Actually, it's not Hillary's fault -- the dress designer must have been a Republican.

Photo: AP Photo/Jason DeCrow.
at 6:15 AM
Email ThisBlogThis!Share to TwitterShare to FacebookShare to Pinterest
Labels: Hillary