...Hailey officer Shelly Pharis wrote in a probable cause affidavit that when she arrived at the bar she found Brutsche-Ely, completely unclothed, outside and in front of the nightclub yelling at Mint security personnel and patrons who had followed the fracas outside. 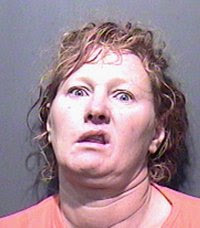 ...Pharis, with the assistance of other officers, was able to transport Brutsche-Ely to jail, where four other crimes allegedly occurred. While in a holding cell, Brutsche-Ely allegedly broke a sprinkler head by striking it with a folded blanket, flooding the cell and causing more than $1,500 in damage.

"We were still trying to control the female when I felt pain in my left shoulder," Miller wrote in a probable cause affidavit. "I looked and observed the woman biting me...

Executive summary: naked woman kicks cops in groin, requires five armed police officers to be subdued, and then goes all Al Franken on the jailers. Word is that the Democrat Party is eyeing her for a Senate run.
at 9:27 PM
Email ThisBlogThis!Share to TwitterShare to FacebookShare to Pinterest
Labels: Water-cooler