The mainstream media could have destroyed Barack Obama's campaign with a single 60 Minutes segment and a John Stossel ABC Special. Their failure to report on Obama's background and associates represents one of the fundamental flaws of today's political scene: complete lack of balance.

For that reason, a group called 50 Million Americans is forming a citizens' coalition to fight media bias. 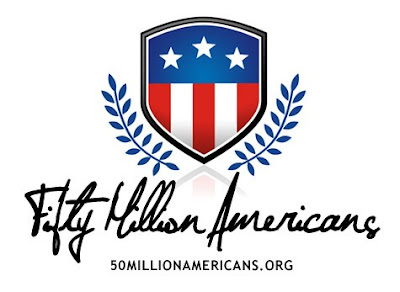 We the People have been duped. It is painfully apparent that many of the largest media and news organizations in this country are corrupt and are incapable of being straight with us. These organizations have rejected their ethical obligations and now serve as voluntary propagandists to an openly biased political and social agenda.

In just the last few days we've witnessed several different reports where mainstream-media (MSM) representatives have dropped any pretense of objectivity and have openly admitted working with an institutionalized bias. They have confirmed purposely attacking people who do not fit this bias, and confirm failing to do their duty to adequately investigate those people who best fit the bias...

Check it out and report back here when you're done.

...my chief reason for leaving [is that] I want to be part of a team that shares a common goal and commitment. I want to work with folks who share my basic values. I no longer want to be the odd man out. I don't want to start my mornings with a running argument about politics that I'll almost invariably lose by virtue of the stacked numbers. Sad to say, today's newspaper business is not that place. Its fierce diversity efforts don't seem to extend to broadening the range of acceptable opinions in the trade. So much "diversity," yet so much monolithic thinking.