A love story for the ages: the press and Barack Obama


Even foreign journalists were stunned by the love affair between the press and Obama:

The late Jerome Holtzman, a sports writing institution in Chicago, wrote a book 35 years ago called No Cheering in the Press Box... 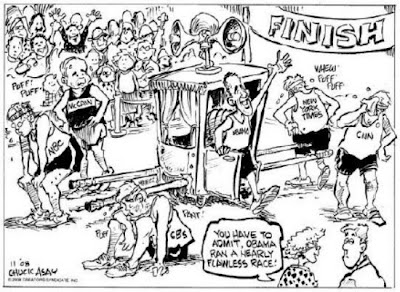 I was in the press tent in Chicago on election night, with some hundred other journalists whose news organizations had ponied up large for a tabled seat at Grant Park. These were all veteran reporters, including the "travelling media" posse – embeds – who had accompanied Barack Obama throughout the campaign.

At 10 p.m. on Tuesday, Wolf Blitzer appeared on the giant television screen to announce Obama had won the U.S. presidency, as projected by CNN, which was hardly a risky declaration with several big swing states already in the bag.

Huge cheers erupted, squeals of delight, and some reporters high-fived.

I was stunned. Not at the victory, of course, but that top-drawer journalists would so lose their arm's-length professional detachment from events...

Only a day or two late, the Washington Post helpfully admitted it was in the tank for Barack all along. Today Post Ombudsman Deborah Howell issued a half-hearted apology.

...readers have been consistently critical of the lack of probing issues coverage and what they saw as a tilt toward Democrat Barack Obama. My surveys, which ended on Election Day, show that they are right on both counts...

...Obama deserved tougher scrutiny than he got, especially of his undergraduate years, his start in Chicago and his relationship with Antoin "Tony" Rezko, who was convicted this year of influence-peddling in Chicago. The Post did nothing on Obama's acknowledged drug use as a teenager.

...[another] gaping hole in coverage involved Joe Biden, Obama's running mate. When Gov. Sarah Palin was nominated for vice president, reporters were booking the next flight to Alaska. Some readers thought The Post went over Palin with a fine-tooth comb and neglected Biden. They are right; it was a serious omission.

Timely reporting from the mainstream media, as usual.

At least the Post 'fessed up. Blithering idiot Will Bunch of the Philadelphia Daily Birdcage-liner says that media bias just saved America.

In the weeks immediately following the Republican National Convention, the McCain campaign made a conscious decision to declare war on the media and to use that “media war” as an excuse to run several ads that were misleading or egregiously false. It was a do-or-die moment, and there were enough reporters in 2008 who were willing to shed the cloak of contrived objectivity – to acknowledge the once unprintable fact that one side was lying more than other.

And it may well have been a turning point in the election...

[Ed: the Fannie Mae-inspired meltdown of the financial system, of course, had absolutely nothing to do with it.]

...for eight years now, there’s been an out-of-control fire raging outside... a fire that was built upon the USA Patriot Act and Guantanamo and rendition and torture and signing statements and 16 words in a State of the Union Address. Ultimately, saving the last fabric of democracy is more important than worrying about what contrived commandments of journalism were stepped on while the blaze was finally extinguished.

I myself would call it truth-telling, and honest journalism, but now we have some who want to call it “media bias.” That’s fine with me, but understand this.

Buffoonery has a new name and its name is "Will Bunch". This feverishly partisan leftist, who presumably is paid in Starbucks gift certificates for his literary excretions, has unwittingly written an epitaph for his own profession. Mission Accomplished!