Moments after the election the media breathlessly reported that gun sales had hit record levels. What the media did its best to obfuscate is the vigor with which President-Elect Obama will pursue egregious restrictions like the "Assault Weapons" Ban (AWB). 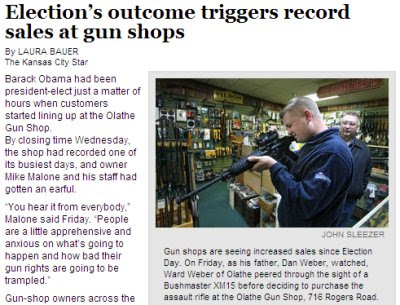 The Kansas City Star was one of many newspapers laying down covering fire for the AWB.

It... is unclear whether a serious push for regulation is likely from Congress. The number of Democrats there who support gun rights has increased. Also, the party fell short Tuesday of winning a filibuster-proof majority in the Senate, leaving Republicans leverage against laws they don’t like. 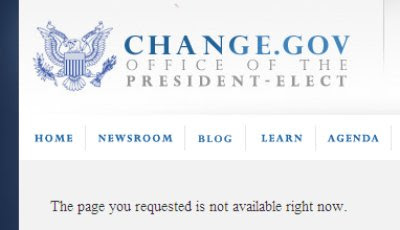 However the offending page -- http://change.gov/agenda/urbanpolicy/ -- quickly disappeared down the memory hole after staff realized their plans had been revealed just a bit too soon.

The NRA-ILA has a PDF snapshot of the page held by the Google cache prior to its disappearance. And it completely explains the duplicity of the Obama campaign when it comes to the Second Amendment.

Senator Barack Obama's presidential campaign slogan, "the audacity of hope," should have instead been "the audacity of deceit." After months of telling the American people that he supports the Second Amendment, and only hours after being declared the president-elect, the Obama transition team website announced an agenda taken straight from the anti-gun lobby--four initiatives designed to ban guns and drive law-abiding firearm manufacturers and dealers out of business...

Read the whole thing. And for those of you citizens represented (or should I say "ruled"?) by "Blue Dog Democrats", a few telephone calls and emails might be in order.

Of course, the proposed ban wouldn't apply to the ruling class; only to the rabble like us. This is evidenced by a recent photo of U.S. Secret Service agents protecting the President-Elect on a visit to the gym. 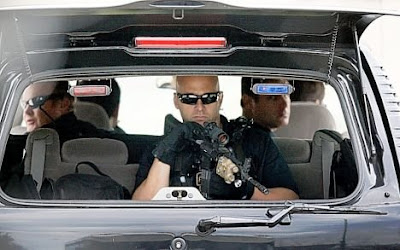 Whereupon commenter Jay.Mac dryly observed, "And look -- they're armed with the type of weapons that Obama wants to permanently ban for the rest of America because 'such weapons belong on foreign battlefields and not on our streets.'"

Be warned: you can be sure that the offending page only went on a temporary hiatus.

Update: Instapundit links (thanks!) and points us to David Hardy:

OBAMA GOING AFTER RIGHT-TO-CARRY LAWS? "His people are seriously considering a federal ban or restriction on 'right to carry' laws. Exactly where the constitutional power to enact such a measure is to be found is less than clear to me. But so are a lot of other things like that." That seems like it would be a major mistake to me. Plus, the missing assault-weapon ban language reappears. I can think of nothing more likely to generate a nasty backlash than a move like this.