Richard Baehr writes "Every time some Democrat says we need to immediately shift to renewable fuels, because we only have 3% of the world's supply of oil in this country, that person is lying." He points us to evidence supplied by the United States Geological Survey earlier this year. 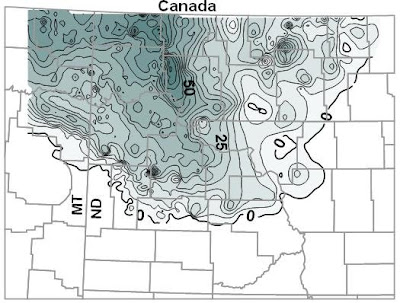 ...A U.S. Geological Survey assessment, released April 10, shows a 25-fold increase in the amount of oil that can be recovered compared to the agency's 1995 estimate of 151 million barrels of oil...

But let's not drill, Nancy Reid O'Schumer. That would help the economy improve, reduce our foreign trade deficit and drop overall reliance on Middle East oil.

And maybe if the New York Times reported this kind of news once a decade, they wouldn't be headed into the crapper faster than Michael Moore's Cheesy Double Bean Burrito lunch from Taco Bell.
at 7:47 PM
Email ThisBlogThis!Share to TwitterShare to FacebookShare to Pinterest
Labels: Democrats, Energy