Breaking: Obama agrees to a bailout of the New York Times 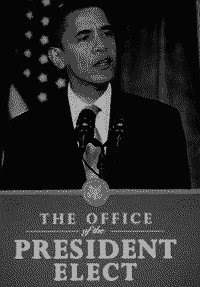 Only hours after Mediapost reported that The New York Times had a negative net worth, President-Elect Barack Obama announced a $5 billion bailout rescue package for the media concern. In a hastily arranged press conference at the newly constructed Office of the President-Elect, Obama noted the importance of the Times' ability to influence public opinion.

"It's not overstating things to say that I owe my presidency to the New York Times," he stated in his perfectly pitched, baritone voice. His hand smoothed a crease in his tailor-made Canali suit, which was precisely matched with a cream Ike Behar shirt and baby blue tie. "The Times' prowess at non-investigation and their matchless creativity related to John and Cindy McCain stories were, no doubt, critical to the process."

"Losing the Times would be like losing a father or, in my case, a preacher. Therefore, I'm happy to announce that the Federal Government will be writing Bill Keller a check for $5 billion dollars to keep the Times afloat for at least another four years."

The press conference was briefly marred by Maureen Dowd fainting and Paul Krugman experiencing "a thrill going up my leg."

Hat tip: Larry. Linked by: Mitchell Langbert. Thanks!
at 9:23 PM
Email ThisBlogThis!Share to TwitterShare to FacebookShare to Pinterest
Labels: Water-cooler