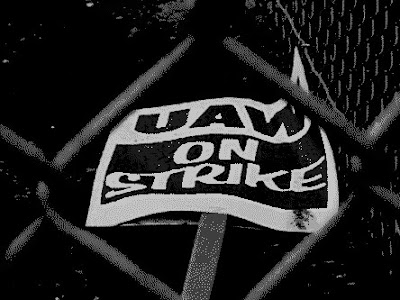 GM will have less than $5 billion in cash by late December and this cash level “could be overwhelmed by payables coming due in early January,” according to Rod Lache of Deutsche Bank. GM is on the brink [and its] failure could make Lehman’s bankruptcy seem like a hiccup.

...Assuming GM’s revenue for 2008 ends up at $150 billion, its challenge is to trim expenses by about $24 billion per year. Some of these reductions will come from fixed costs, and others will come from variable costs as production decreases.

But these still leave GM in a position to burn $10 billion in cash annually in 2009-2010, assuming – conservatively - its market share declines from 22% to 20%... Lache says two drastic steps are needed to get GM to a break-even level:

* Brand Line Reduction: GM currently has eight brands (Chevrolet, Cadillac, Hummer, Saab, Buick, GMC, Saturn, and Pontiac). Lache estimates that reconfiguring to a “more defendable” core brand structure of three brands (Chevrolet, Cadillac, and Buick) would lower GM’s fixed costs by $5 billion per year. After this reconfiguring, GM’s product line would be comparable to that of Toyota or Honda. Such a reduction would also dramatically reduce the number of GM dealerships (currently approximately 7,000), although it is not clear whether it would reduce them to Toyota’s level of 1,500 dealerships.

* Move All Tier 1 Employees to Tier 1.5 Status Immediately: GM’s 2007 labor contract defines three categories of workers: Core/Tier 1, Tier 1.5, and Tier 2. A summary of labor costs for these tiers, along with Toyota’s costs for comparative purposes, is below... 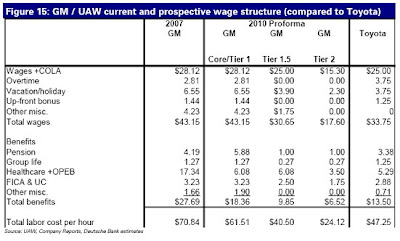 But if the auto guys don't feel like enacting these drastic measures, we could always cut the UAW a check for $500 billion or so.