Shi'as believe that Muhammad al-Mahdi will reappear when the world has fallen into chaos and civil war emerges between the human race for no reason. At this time, it is believed, half of the true believers will ride from Yemen carrying white flags to Mecca, while the other half will ride from Karbala, in Iraq, carrying black flags to Mecca. At this time, Muhammad al-Mahdi will come wielding God's Sword, the Blade of Evil's Bane, Zulfiqar (Arabic: ذو الفقار, ðū l-fiqār), the Double-Bladed Sword. This heralds the apocalypse. The expansion [of the city of Qom] is driven by an apocalyptic vision: that Shiite Islam's long-hidden 12th Imam, or Mahdi, will soon emerge -- possibly at the mosque of Jamkaran -- to inaugurate the end of the world. The man who provided $20 million to prepare the shrine for that moment, Iranian President Mahmoud Ahmadinejad, has reportedly told his cabinet that he expects the Mahdi to arrive within the next several years. In a speech four years ago, Iran's president Mahmoud Ahmadinejad stated, "Our revolution's main mission is to pave the way for the reappearance of the 12th Imam, the Mahdi. Therefore, Iran should become a powerful, developed and model Islamic society. Today, we should define our economic, cultural and political policies based on the policy of Imam Mahdi's return. We should avoid copying the West's policies and systems." In 2007, after additional UN sanctions were threatened, Ahmadinejad stated: Princeton professor Bernard Lewis states that "...there is a radical difference between the Islamic Republic of Iran and other governments with nuclear weapons. This difference is expressed in what can only be described as the apocalyptic worldview of Iran’s present rulers." On the holy topic of suicide bombing (martyrdom), Ahmadinejad said: "Is there art that is more beautiful, more divine, and more eternal than the art of martyrdom? A nation with martyrdom knows no captivity." The most dangerous leaders in history are those like Hitler and Ahmadinejad, fueled by totalitarian ideologies and mystical belief systems. Ahmadinejad believes in the imminent return of 12th Imam, which he further believes he can hasten. He also senses that he has a personal responsibility to expedite the return of the Mahdi and is therefore preparing Iran for the apocalypse. Given the willful incompetence of the UN and the IAEA, Iran's pursuit of nuclear weapons has continued unchecked. They now appear to have achieved their goal. 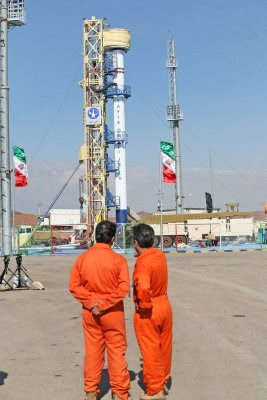 Furthermore, "Iran's success in firing a satellite into Earth orbit on board one of its own missiles serves notice that it effectively already has the capability to build intercontinental ballistic missiles that can put all of Western Europe and the Eastern Seaboard cities of the United States within range." at 9:30 PM
Email ThisBlogThis!Share to TwitterShare to FacebookShare to Pinterest
Labels: extremism, War