We need a new name for the 'War on Terror'

U.S. Secretary of State Hillary Clinton said on Monday the Obama administration had dropped "war on terror" from its lexicon, rhetoric former President George W. Bush used to justify many of his actions. 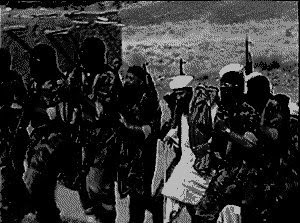 "The (Obama) administration has stopped using the phrase and I think that speaks for itself. Obviously," Clinton told reporters traveling with her to The Hague for a conference on Afghanistan, which Bush called part of his "global war on terror."

The term "war on terror" was coined after the September 11, 2001 attacks against the United States, which were planned in Afghanistan by the militant group al Qaeda.

The phrase was strongly criticized by human rights groups who said it was used to justify many actions, such as the opening of the Guantanamo Bay prison for detainees held without trial at the U.S. Naval base in Cuba.

Internationally, the phrase was seen by critics as a "with-us-or-against-us" philosophy, overly dependent on military force and what many Muslims decried as an attack on Islam.

In the interest of political correctness, may I suggest some alternatives?

Update: More from IMAO and commenters:

• The War of Northern American Aggression