With its building hocked, its ad revenue devastated and its stock price at pink-sheet levels, how much further can the The New York Times fall? Pretty frickin' far, it turns out.

Barry Rubin describes the abominable political cartoon published in the Times and other newspapers around the world. It is more reminiscent of a Josef Goebbels production than anything else.

...To begin with, it is not a very good cartoon and bears a striking resemblance to anti-Israel propaganda cartoons in its crudity and one-sidedness. Aesthetic decline has accompanied political crudeness. It doesn’t just say: these people are wrong but these people are 100 percent evil and hateful. The next step is, of course, they deserve to die and their state deserves to be wiped off the map... 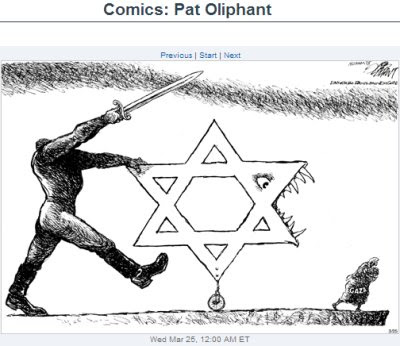 ...What are these techniques [of asymmetric warfare]? Terrorism, indifference to the sacrifice of its people, indifference to material losses, refusal to compromise, extending the war for ever. This is precisely the technique of Hamas: let’s continue attacking Israel in order to provoke it to hit us, let’s target Israeli civilians, let’s seek a total victory based on genocide, let’s use our own civilians as human shields, and with such methods we will win. One way we will win is to demonize those who defend themselves, to put them in positions where they have a choice between surrender and looking bad. This cartoon is a victory for Hamas. But it is also a victory for all those who would fight the West and other democracies (India, for example) using these methods. Remember September 11?

...The big figure has no head, and hence is not a human being. Israelis are not human. Moreover the headless figure is irrational. We are to believe that Israel attacked Gaza for no reason. Forget about thousands of rockets, hundreds of mortar shells, and scores of cross-border attacks. The tiny figure on the right is no threat. So there is no reason to attack it. Attacking is immoral and irrational. The same could—and has—been said about al-Qaida, Hizballah, Pakistani terrorists striking at Mumbai, etc.

...Dehumanization: The figure on the left is a monster, a robot. Monsters and robots deserve no sympathy; they have no right to self-defense. If tomorrow an Israeli child or civilian is killed in a terrorist attack, how can one have sympathy for these people since they are not people? 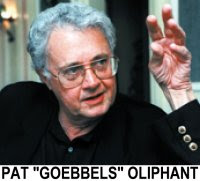 ...Goosestep: The leg is raised In a Nazi goosestep; the shoe is a jackboot. Thus, Israel is a Nazi power. But why is it a Nazi power? Because it isn’t human and just attacks women and children for no reason at all. And what happens then? Since Israel is said to be Nazi, any sympathy for 2000 years of Jewish suffering—including Arab terrorist attacks—is thus erased. Incidentally, this is all being done when there is still no proof (not even weak proof) for a single Israeli soldier having committed a single atrocity. Where, then, is the rationality here?

...Sword: Ironically, the sword is the weapon used by Islamists to behead people. Why a sword? Because it is a primitive weapon for a primitive people. The hand which is very hairy—again the ape, dehumanized image—holds the sword at a 45 degree angle reminiscent of a Nazi salute...

...Finally, this cartoon represents the mentality that will plague every Western and democratic state in the coming years. Imagine the exact same cartoon but with the Magen David replaced by the Stars and Stripes—the evil America attacking the Taliban or al-Qaida, or Iraq, or Muslims in general. Indeed, this is the kind of cartoon which has appeared aimed against America or the West in general. It is part of the merging of much Western fashionable intellectual and cultural thinking with that of extremist Third World, and especially radical Islamist, propaganda.

The cartoonist doesn’t hate Jews; he probably doesn’t even hate Israelis. What is involved here is a lack of understanding so enormous that it will both incite hatred; cause violence and death; and block policies needed to help people—including Palestinians who, are supposedly the object of its sympathy but thus doomed to suffer under a repressive regime with a permanent war policy.

Antisemitism? Ask not for whom the bell tolls because Israel, the canary in the mine—the one who first they came for—can tell you that you are next.