Barack Obama's profligate spending programs, in aggregate totaling many trillions of dollars, translate to the act of printing money at a rate never seen in human history. Experts, from the nonpartisan Congressional Budget Office to Democrat economists, believe that these plans put America on a glide-path to catastrophe over the next ten years. 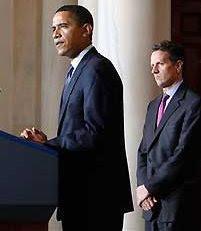 President Barack Obama's budget would generate unsustainably large deficits averaging almost $1 trillion a year over the next decade, according to new estimates released Friday... The [CBO] figures predict Obama's budget will produce $9.3 trillion worth of red ink over 2010-2019. That's $2.3 trillion worse than the administration predicted in its budget just last month.

Worst of all, CBO says the deficit under Obama's policies would never go below 4 percent of the size of the economy, figures that economists agree are unsustainable. By the end of the decade, the deficit would exceed 5 percent of gross domestic product, a dangerously high level.

And consider the spending itself: a stimulus bill that sends billions of taxpayer dollars to a "criminal enterprise" like ACORN and spews hundreds of billions to pork-laden construction projects. A budget that includes 9,000 earmarks. Mortgage rescue packages for deadbeats and real-estate flippers. Trillions of dollars going out the front door and the back door of the Federal Reserve.

The full faith and credit of the U.S. financial system hangs in the balance. The dollar, once the strongest currency in the world, is on a trajectory to rival a third-world medium of exchange.

The national debt just hit $11 trillion, which reflects only the "on-the-books" amount. The true debt -- including Social Security and Medicare -- is now $56 trillion. This translates to:

$483,000 per American household
That amount of debt is, quite obviously, unsustainable.

Whether the outcome is rampant inflation (devaluation of the currency); an inability to sell U.S. debt to foreigners (China has already warned us about our spending); or the federal government's inability to make payments on the debt (bankruptcy), Barack Obama's behavior should come as no surprise. The urgency of destroying capitalism was baked into his upbringing. 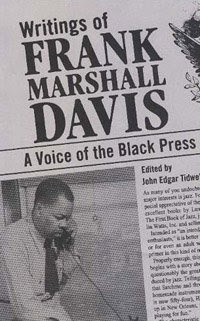 Obama's mentor Frank Marshall Davis -- the veiled figure known only as "Frank" in Barack Obama's memoir Dreams from my Father -- was openly sympathetic to Communists. His affiliations with a variety of hard left groups were open. At that time, the Communist Party had tens of thousands of members, some of them clandestine Soviet officials who had penetrated government and industry. It received covert subsidies from the Soviet Union itself. In 1949, Davis himself predicted the collapse of Capitalism:

"Democracy today lies weak and slowly dying from the poison administered by the divident doctors in Washington and Wall Street who have fooled a trusting public into believing that they are the specialists who would save us from the dread diseases of socialism and communism. . . . They hope to hand us fascism disguised as the healed democracy." (Honolulu Record, July 28, 1949, p. 8)

Bill Ayers, who worked closely with Barack Obama on the Chicago Annenberg Challenge and the Woods Fund, wrote an eerily similar missive in 2008. It plainly predicts the death of Capitalism:

"Capitalism played its role historically and is exhausted as a force for progress: built on exploitation, theft, conquest, war, and racism, capitalism and imperialism must be defeated and a world revolution—a revolution against war and racism and materialism, a revolution based on human solidarity and love, cooperation and the common good—must win."

Jeremiah Wright, Obama's self-described spiritual advisor, mentor and family friend, offered a similar theme over the two decades comprising their relationship. Hostility to capitalism and America itself make steady appearances in Wright's sermons and his writings. 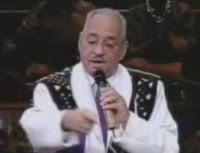 Wright views the United States as a criminal nation... Implicitly drawing on Marxist "dependency theory," Wright blames Africa's troubles on capitalist exploitation by the West, and also on inadequate American aid: "Some analysts would go so far as to even call what [the United States, the G-8, and multinational corporations] are doing [in Africa] genocide!"

According to Wright, America's alleged genocide in Africa, as well as its treatment of "Africans in the Western diaspora," both leads to and flows from a single underlying truth: "White supremacy is the bed rock of the philosophical, ideological and theological foundations of this country." So for Wright, it's really not a question of correcting America in the spirit of a loving patriot. America, to Wright, is a kind of alien formation, scarcely less of a "cage" for "Africans in the Western Diaspora" than it was during the days of slavery: "...White supremacy undergirds the thought, the ideology, the theol-ogy, the sociology, the legal structure, the educational system, the healthcare system, and the entire reality of the United States of America.

In 2008, Wright, like Ayers, predicted that a revolution would destroy Capitalism as a force in the world.

A true revolution of values will soon look uneasily on the glaring contrast of poverty and wealth. With righteous indignation, it will look across the seas and see individual capitalists of the West investing huge sums of money in Asia, Africa, and South America, only to take the profits out with no concern for the social betterment of the countries, and say, 'This is not just.'

* * *
This theme is the single immutable and consistent lesson taught by Obama's mentors and spiritual advisers: Capitalism is dying -- must die -- as an economic force for reasons of fairness and justice. America, as the world hub of capitalism, is evil. Therefore hastening the collapse of capitalism is an act of goodness.

If you concede that Barack Obama is a bright man -- and with Columbia and Harvard degrees under his belt, it's hard to dispute that notion -- then only one conclusion is possible. Barack Obama, at the helm of the world's strongest country, is fulfilling his promise to his mentors. Barack Obama is intentionally destroying the American economy.

The Revolution is Here.


Linked by: Bob McCarty and Parkway Rest Stop. Thanks!