The Climate Change Grift Illustrated in One Simple Chart


Global citizen Barack Obama recently promised the world a bold new strategy for dealing with global warming. The plan can be summarized with one simple phrase: Wreck the Economy at the Worst Possible Time. Heritage's financial analysis shows:

The grift was originally called "The Kyoto Protocol". But the scam has since undergone a name change reminiscent of the re-branding global warming has undergone -- to "Climate Change" (which should fool the media because of phenomena known as "seasons"). It's now known as "The Bali Action Plan" and you can read it online.

It is called AD HOC WORKING GROUP ON LONG-TERM COOPERATIVE ACTION UNDER THE CONVENTION (Part 1 and Part 2, both in PDF format), dated 18 March 2009. It demands the following (emphases mine):

(a) An assessed contribution from developed country Parties as a percentage of gross national product or gross domestic product; (Taxes)

(b) An assessed contribution from all Parties, except LDCs, based on a predefined set of criteria, including GHG emissions, respective capacity and population; (More taxes)

(c) Auctioning of assigned amounts or emission allowances at the international and/or domestic level; (More taxes)

(g) A share of proceeds from market-based mechanisms under the Kyoto Protocol. (More taxes) 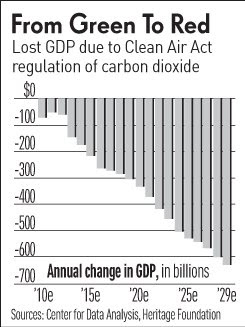 Gee, I detect a pattern.

Investors Business Daily calls the EPA's finding -- that carbon dioxide is toxic, and therefore should be regulated -- "The Anti-Stimulus."

Carbon dioxide, which comprises an infinitesimally tiny fraction of Earth's greenhouse gases, is no more dangerous than oxygen or water.

Regulation of carbon dioxide is a scam designed to accomplish two things: (a) increase the power of the state over the individual and (b) impoverish our society.

But it's not about economics with Enviro-Statists like Obama. It's about ideology.

Welcome to intellectual -- and actual -- bankruptcy.