Financial Post Editor asks "Is this the End of America?"


Terence Corcoran is the editor of The Financial Post, the oldest of Canada's financial newspapers. Corcoran's most recent op-ed excoriates the Obama administration and the Democrat-controlled Congress, asserting that they are "riddled with slapdash, incompetence and gamesmanship":

[The] Federal Reserve is dropping trillions of fresh paper dollars on the world economy, the President of the United States is cracking jokes on late night comedy shows, his energy minister is threatening a trade war over carbon emissions, his treasury secretary is dithering over a banking reform program amid rising concerns over his competence and a monumentally dysfunctional U.S. Congress is launching another public jihad against corporations and bankers. 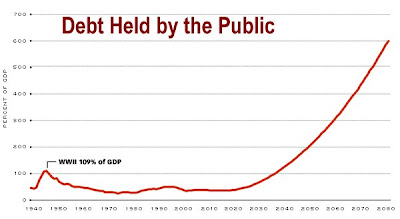 As an aghast world — from China to Chicago and Chihuahua — watches, the circus-like U.S. political system seems to be declining into near chaos. Through it all, stock and financial markets are paralyzed. The more the policy regime does, the worse the outlook gets. The multi-ringed spectacle raises a disturbing question in many minds: Is this the end of America?

...Reform of health care, environmental policy, education, energy, banking, regulation — every nook and cranny of the U.S. economy has been put on alert for major change. Expansion of government spending, plunging the U.S. into unprecedented deficits, is without parallel. In economic policy, through regulation and control of energy output, financial services and monetary expansion, the U.S. government has embarked on a fundamental reshaping of America. It is designed, in short, to bring on the end of America.

...The total monetary base, already at astronomical levels, is now expected to take another big hit with the new Fed policy of buying up U.S. longer-term treasury bills in a bid to drive down long-term interest rates... For the rest of the world, however, the worry is that America is at risk of becoming the fountainhead of a new inflationary outburst. The U.S. dollar is now in decline, gold is moving sharply higher, and new global currency turmoil is on the horizon...

...A paper just published by the Federal Reserve Bank of St. Louis, source of the chart above, says that the Fed will have to be prepared to absorb all the excess money it has poured into the U.S. economy. It will be a technical and political challenge unlike any central bank has ever undertaken. The future of America is at stake.

Americans must stop Barack Obama and the Pelosicrats from their program of economic suicide. The alternative is too difficult to contemplate.


Related: St. Louis Federal Reserve: Deficits, Debt and Looming Disaster: Reform of Entitlement Programs May Be the Only Hope.