9 steps cities must take to save themselves from fiscal collapse

After negotiations with public sector unions and bondholders collapsed, the city of Stockton, California announced that it will file for bankruptcy.

Mike Shedlock says that the real reason for cities' burgeoning financial troubles revolve around unattainable pension promises, which he calls "a death trap for cities." 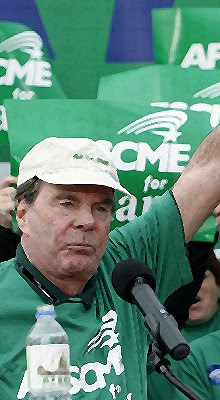 1. The immediate solution is bankruptcy. Expect to see more cities file. However, longer-term structural problems must also be addressed.
2. Untenable pension contracts need to be tossed out by the courts and benefits reduced. Every taxpayer not on the public dole should cheer bankruptcy, not resist it.
3. End defined benefit pension plans for public union workers.
4. End collective bargaining for public union workers. Governor Scott Walker in Wisconsin has proven that can be done.
5. Scrap Davis-Bacon and all state prevailing wage laws.
6. Institute national right-to-work laws.
7. Merit pay for teachers
8. More competition from accredited online schools to drive education costs way down
9. Scrap student loan programs that only benefit administrators and educators, not the kids.

It's time to stop overpaying for all government-sponsored services including but not limited to police, fire, prison-workers, and education. The vicious, self-serving grip that unions and their political supporters have on this nation has to end. Governor Walker partially paved the way in Wisconsin. Other states must follow through. At the national level, we desperately need right-to-work laws while ending prevailing wages.

More and more municipalities -- unable to print money like their federal cousins -- will have to declare bankruptcy and wipe the slate clean.

Because sooner or later, the laws of mathematics will win out.


Related: A Brief, Illustrated History of the Public Sector Unions That, Together With The Democrat Party, Are Waging War on the Taxpayer.

Never mind. The Captcha feature is a bitch.