Another economic chart you won't see in vintage media: When it comes to the U.S. economy, 'Something is wrong'

And that something is you-know-who. James Pethokoukis points us to a Strategas Research report that delivers the not-so-shocking news.

The significant risk of an economic slowdown in the U.S. economy, which is still 71% consumer spending, tends to come when you have the saving rate rising at the same time you have a shock, such as an energy & inflation spike. Looking at 2012, the personal saving rate has declined to 3.4%, and with inflation now trending lower (following the drop in energy prices), it does not appear that we have the typical pre-conditions for a domestic recession this year, despite the uncertainty in Europe. WTI oil at $82 is significant.

However, we must stop short of saying that these 2012 developments make the U.S. economy robust to shocks, including the 2013 “fiscal cliff.” The main reason is that nominal GDP still looks vulnerable, running at just below a 4% pace. A more robust expansion would typically be characterized by nominal growth of at least 6%, ie, something is wrong. 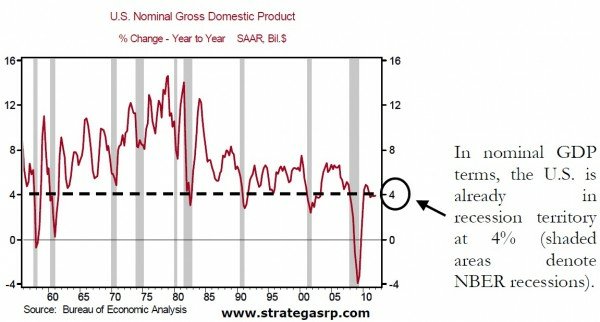 Not many investors we visit with watch nominal GDP closely. Many people got burned in the 1970s – you had 9% growth, but it was with 9% inflation, so there was zero real growth. That’s certainly a fair calculation. But there’s still some information in nominal GDP as well – it is telling us how rapidly the nominal dollar “pie” is expanding. All companies report revenues, costs, and profits in nominal dollars. With sluggish nominal GDP, it’s not clear we have fast enough growth to see both profits expand and labor compensation grow (to support future top-line growth).

That’s the “something” that is wrong. It’s tough to say you are in a self-reinforcing wage-income-sales spiral with the “pie” expanding so sluggishly. This doesn’t mean you have to be in recession, in inflation-adjusted terms, right away. But it does suggest the U.S. economy is vulnerable to shocks, especially if other exogenous sources of demand are waning (Europe is weakening, China is slowing, India is slowing, etc).

And, yes: it's still Bush's fault. And James Buchanan's. And ATMs. And the Japanese Tsunami. Oh, and solar storms. Sorry, forgot those.

all we need to do is use solar power, give everyone amnesty, ban guns and large soft drinks and charge millionaires and billionaires more taxes.

Heh. That looks like that "Global Warming" graph you posted last week.

Crap. And the unemployment graph after that.

Damn. Does any Obama graph go up? Other than food stamps and stuff?

@Reliapundit, you forgot popcorn, they have to ban popcorn.

Surprisingly accurate view of the democrat agenda. You forgot gay rights (but I'm actually for that).

If you think inflation is going down with the "decline" in gas prices, I suggest you go grocery shopping.

The "experts" sit in their ivory towers theorizing, juggling numbers and producing nifty pie charts and graphs. Each has some favorite idea to promote and every one can cobble statistics together to support the theory du jour. What they DON'T do is try to feed a family on their ever-decreasing incomes.

We peasants know more about the economy than they do. Reality smacks us upside the head every time we enter the supermarket.