One More Chart Democrats and RINOs Don't Want You to See

Never mind that it's completely accurate.

Newt Gingrich had fun calling President Obama the “food stamp president,” but many Republicans are just as responsible for the exploding costs of this welfare state program. 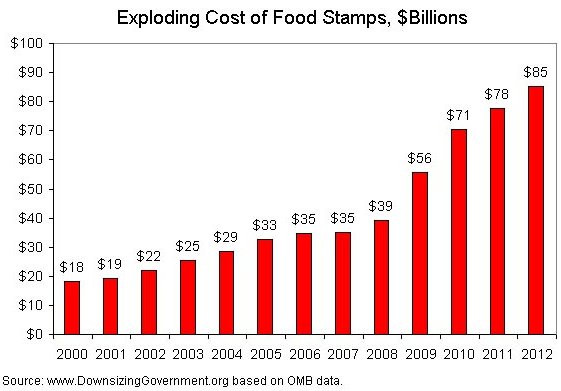 Despite the quadrupling of food stamp spending, 13 Republicans in the Senate yesterday—including supposed conservatives Bob Corker and Rob Portman—joined Democrats to defeat reforms to the program sponsored by Senator Rand Paul.

If you have a couple of bucks to spare, please consider donating to Jim DeMint's Senate Conservatives Fund. We need to reinforce our class of 2010 with true Constitutional conservatives.

Because Democrats and big-government Republicans need to go.

Foodstamps doubled during the Bushies term. Obama has beat that. But can someone explain to me what non national security agency has a budget this big or how many non medical or pension plans exceed this?

80 billion for welfare queens and their bastards?