Someone claiming to be a Princeton University professor of economics named Alan Blinder penned an op-ed in today's Wall Street Journal ("Stimulus Isn't a Dirty Word"). Blinder's article is only noteworthy because of its record-breaking levels of dishonesty, partisan hackery, and rhetorical buffoonery all wrapped up into a nice little log by a so-called "professor".

Many Democrats also want to build and repair more roads, bridges, tunnels and the like—taking advantage of the rare combination of historically low government borrowing rates and historically high unemployment among construction workers.

Gee, Einstein: didn't we just deficit-spend a record-setting $5 or so trillion dollars -- thanks in great part to a so-called "Stimulus" program -- that was an utter and complete failure? What happened to all of that money? How about we get a detailed accounting of that disaster before we borrow more from generations yet unborn, Sparky?

Actually, genius, the private sector produces goods and services. That's called productivity. See, what the government does is suck productivity out of the private sector to fund its ever-increasing bureaucracies that serve -- primarily -- to perpetuate themselves. Government never seems to get smaller, does it, Bucky? In good times and bad, government gets bigger. Does that sounds sustainable to you, Perfesser?

In the near term, we need modest stimulus, focused tightly on creating jobs. But that stimulus should be paired with a vastly larger dose of long-run deficit reduction—perhaps 10 to 20 times as large as the stimulus—over the 10-year budget window... Economically, this can be done; it's not even that hard. But if Republicans continue to reject even deals comprised of $10 of spending cuts for each $1 of tax increases, it's hard to see how we get there politically.

Say, Al, did the Republicans reject a budget that proposed $10 in spending cuts for each $1 of tax increases? Because I -- and the rest of the country -- must have missed that, what with all of the golf, vacations and suing states for enforcing voter ID and enforcing immigration laws. In fact, if memory serves, it's been over 1,200 days since the Democrat-controlled body of Congress actually passed a budget. So email me the link to that budget with the 10:1 budget cut ratio, would ya, Alvin?

The U.S. government can now borrow for five years at about 0.75% and for 10 years at about 1.7%. Both rates are far below expected inflation, making real interest rates sharply negative. Yet legions of skilled construction workers remain unemployed while we drive our cars over pothole-laden roads and creaky bridges. Does this make sense?

It sure does if: (a) you don't have a plan to ever pay back your debts, which the Democrats don't; (b) you've got a president who has already rung up more deficit spending than anyone in human history; (c) the Congressional Budget Office and the president's own advisers admit that the current borrowing trajectory is "unsustainable"; and (d) your sovereign debt got downgraded from AAA for the first time. Make sense, Aloysius?

...education is critical to American leadership in the world... Where things do get partisan is in choosing between working harder on traditional public schools versus relying on vouchers, charter schools and the like to provide competition. Here, the research is interesting. It suggests that, on average, charter schools perform neither better nor worse than public schools. 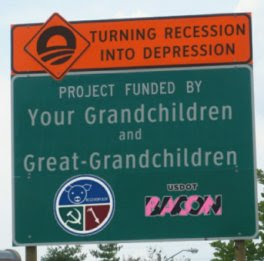 Well, Alston, on the very same editorial page the day before, there was a far more interesting, accurate and relevant article entitled "Why Charter Schools Work" by Deborah Kenny. Ms. Kenny, an author and founder of Harlem Village Academies, describes the two attributes that always drive parents with a choice to send their kids to charter schools: accountability and freedom of choice.

In Washington, DC, for example -- where Democrats obliterated charter schools -- the district spends about $30,000 per student annually, or "about triple what the DC voucher program spends per pupil—and the voucher students have a much higher graduation rate."

Don't you believe in evolution, Alex? Don't you believe in the survival of the fittest? Are you a denier? Because only competition, only Darwinism, only free market principles advance society. But don't ask me, ask your ideological predecessors over in the Soviet Union who also demanded that the state run the entire educational system. Wait, you say there is no Soviet Union any longer?

We've experimented with moving the top rate up or down a few percentage points several times. Under President Clinton in 1993, we raised it to 39.6% from 36% and one of the greatest periods of prosperity in U.S. history followed. Then in 2001, under President George W. Bush, we cut the top rate to 35% from 39.6% and . . . well, you know what followed.

Well, Alton, given that President Clinton enjoyed these two tiny, inconsequential events -- the invention of the World-Wide Web and the Y2K IT spending bonanza -- it would seem to me that even an impeached, disbarred pervert who sold missile secrets to China for campaign donations would be able to preside over a booming economy. And, as for President Bush, I believe revenues to the government improved dramatically after the tax cuts and that it was a mortgage meltdown -- and nothing to do with tax rates -- that caused the economy to collapse.

And we all know who was behind the housing disaster, don't we, Alphonse?


* * * * * * * * *
With embarrassments like this teaching "economics", it's no wonder Princeton doesn't have the temerity to operate a business school.

Havn't you heard, sir? 99% of college professors are either extreme liberals or moderate liberals who believe they're full moderates.

I was so happy to read this piece. Every time I read an op- ed by Alan Blinder it fills me with loathing and irritation.He is a very intelligent,partisan hack who lies shamelessly and distorts facts freely to support the liberal Democratic agenda of the day, whatever it is. I can't figure out if he really believes the B.S. he writes or not.

And he was touted as a possible Fed chairman at one point, I believe - scary thought. Mind you is Bernanke really any different in his actions which help to assist the government's fiscal profligacy by monetizing the debt?

I just read the failed Cash for Clunker program was his brainchild. Enough said.