Yesterday Constitutional attorney Mark R. Levin rightfully excoriated John Roberts' ludicrous decision that saved Obamacare, which essentially rewrote the monstrous law in order to save it. For one, Roberts magically ruled the Individual Mandate a tax, "a position that no lower court accepted".

Facing a barrage of criticism from Constitutional experts, Roberts was on the defensive today, keeping himself in the spotlight and in good graces on the Beltway cocktail circuit.

Chief Justice John Roberts joked today that he’ll escape to an 'impregnable island fortress' after opponents slammed him as a traitor for casting the decisive vote to uphold Barack Obama’s healthcare law. 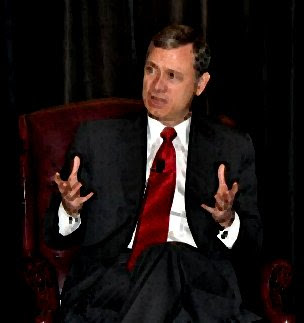 Responding to a question about his summer break, Roberts said he planned to teach a class for two weeks in Malta, the Mediterranean island nation.

'Malta, as you know, is an impregnable island fortress. It seemed like a good idea,' Roberts said, drawing laughter from about 300 judges, attorneys and others attending a four-day conference Friday at a posh southwestern Pennsylvania resort.

Roberts appeared today at a conference hosted by the Judicial Conference of the District of Columbia Circuit, one day after the Supreme Court said the federal government can require citizens to buy health insurance.

...The only direct question Roberts got about the landmark opinion upholding most key provisions of President Barack Obama's health care package came when those at the conference were invited to ask questions... That's when Roberts was asked what he thought his court's legacy would be in 50 years and 'how one recent opinion might fit into that' - an obvious reference to the health care decision.

'Well, I won't answer anything that has to do with the second part of that,' Roberts said. But he said he hopes that the court under him is remembered as one that 'did our job according to the Constitution, of protecting equal justice under the law.'
Lamberth hinted at the controversial decision when he asked Roberts if it bothered him that he can't respond to his critics.

'No,' Roberts said, his brief answer hanging in the air to more laughter.
Opponents of Obamacare immediately lashed out at Roberts after the Chief Justice provided the crucial vote which led to the Supreme Court upholding the controversial law yesterday. 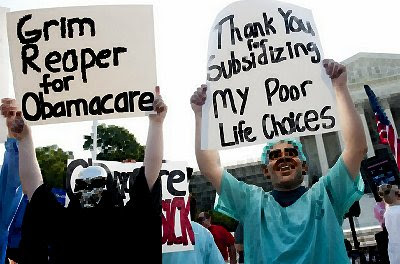 ...Mr Roberts has been seen as a driving force behind a number of high-profile cases which have infuriated conservatives... The National Review Online published an editorial denouncing 'Roberts's Folly', arguing that the five judges who voted to uphold Obamacare had 'done violence' to the Constitution.

...Radio host Bryan Fischer said of the Chief Justice: 'He is going to go down in history as the justice that shredded the Constitution and turned it into a worthless piece of parchment.' ... Republican senator David Vitter of Louisiana accused Mr Roberts of 'amazingly rewriting the law in order to uphold it ... Georgian congressman Jack Kingston went further with his tweet: 'With #Obamacare ruling, I feel like I just lost two great friends: America and Justice Roberts.'

...Many liberals, by contrast, went out of their way to praise a man whose reputation with the left has never been very high. Democratic congressman Brad Sherman of California chimed in: 'Today I am proud to be a member of the Harvard Law School class of 1979, the class that included Chief Justice Roberts.' New York senator Charles Schumer said Mr Roberts had 'acted as the umpire he promised to be.' And left-leaning journalist Jonathan Chait wrote an article in New York magazine entitled 'John Roberts Saves Us All', praising the Chief Justice for avoiding a 'crisis of legitimacy' for the Supreme Court.

Unless we expand the conservative beachhead in 2010, crushing the Marxist Left in November, John Roberts could very well go down in history as the man who killed the Constitution.

Another Beltway elitist who thinks he knows better than the rest of all of you bitter clinger, flyover b&^%$($#.

True colors have been shown.

This vote is just one small part in W.'s immense legacy as a horrible, horrible president.

I think Justice Roberts is playing the long game, and is most likely smarter than the average bear (as he should be). I too was stunned to hear this ruling come down from Roberts, however, the more I investigate the nuances of the ruling the more I find a strong case that the Chief Justice has saved us from Obamacare, not sunk us with it. We'll see.

Sean Bielat released no statement on the decision other than a fundraising letter. He won't be taking up arms against this.

How long before Roberts recommends that other countries adopt South Africa's constitution as a model rather than America's. Clearly he has no use for it. This shouldn't come as a surprise. People with blank slates are not likely to be conservatives regardless what the RINOs claim them to be.