Once again, The Foundry speaks truth to power.

In now-infamous comments on Friday, President Barack Obama informed America that “the private sector is doing fine.” This, of course, was news to the 12.7 million people who are out of work and the millions more who are struggling with the part-time jobs they can find, or have simply given up looking.

While the President’s comment is astoundingly out of touch with the public—and economic reality—perhaps even more distressing is that this wasn’t a passing verbal gaffe. This is actually a consistent talking point of the President and Democratic leadership that goes largely unchallenged by the media. 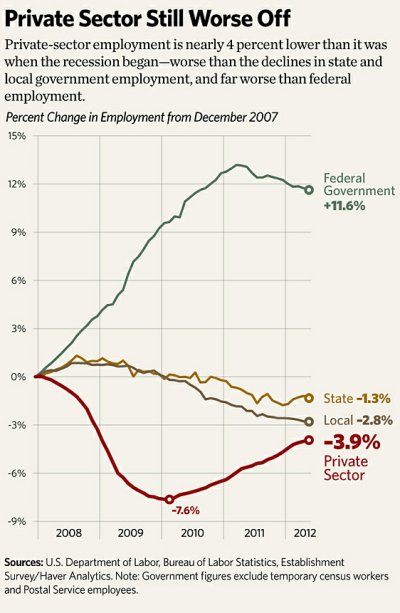 Senate Majority Leader Harry Reid (D–NV) made the same case last fall when he was pushing a $35 billion bailout for state and local governments. “It’s very clear that private-sector jobs have been doing just fine,” Reid argued. “It’s the public-sector jobs where we’ve lost huge numbers, and that’s what this legislation is all about.”

This is the President’s and the Majority Leader’s solution to the jobs crisis: more so-called stimulus and more government employees.

...If anyone is “doing fine,” it’s government employees. This goes beyond the far more generous pension and health benefits they enjoy. While the private sector lost 4.6 million jobs (a 3.9 percent drop) since the recession began, government payrolls have only fallen by 240,000 jobs (a 1.1 percent drop). Federal employment has actually grown nearly 12 percent since the end of 2007, and while the country suffers from 8.2 percent unemployment, the unemployment rate for government employees is just 4.2 percent.

In any case, the federal government borrowing more money to transfer to state and local governments is not a job-creation policy, and it is outside the scope of the federal government. It’s merely a ploy to please union bosses, who are always eager to draw more federal dollars... This government-boosting strategy also ignores the fact that it has been tried before and found wanting. President Obama’s first trillion-dollar stimulus plan was a failure (and a waste). And Europe is in the shape it is because of years of government largesse. Ironically President Obama sought to focus the media’s attention on Europe on Friday in an attempt to divert it from his own economic mismanagement.

...Following a flurry of outrage over his Friday comment, the President backtracked, saying what he meant was that “we’ve actually seen some good momentum in the private sector. That has not been the biggest drag on the economy.” ... Moving from 8.1 percent unemployment to 8.2 percent can only be considered “good momentum” in this White House. However, he’s correct about one thing: The biggest drag on the economy isn’t the private sector, but Washington.

What Democrats and the media (but I repeat myself) can't comprehend is that employment is not the same as productive employment. It is the private sector that produces wealth. It is the public sector that sucks wealth from a society, launders it through countless wasteful agencies and offices, and then redistributes it.

Only those functions of government authorized by the Constitution are legitimate. All other functions must be dismantled, piece by piece, until we have returned to the legal framework our founders created.

And November is coming.