It's still Bush's fault: the U.S. economy looks like it's losing jobs again

So says James Pethokoukis, the economic expert that Paul Krugman wishes he could be.

The private sector is not fine, as some extremely worrisome economic news today emphasizes.

The government’s April Job Opening and Labor Turnover report was, in the words of JPMorgan economists, “soft, lending some credence to the view that the April-May slowing seen in the payroll report was real and not a statistical fluke.” 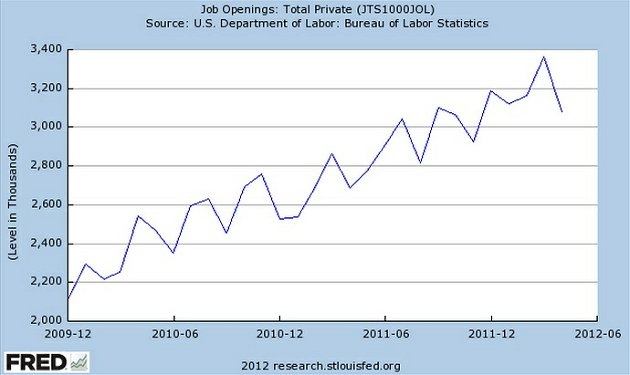 – One bright spot in this report in March was the rising in people quitting their jobs, showing some confidence in the economy. But that “completely reversed itself in April.”

This comes on the heels of last month's report that the Labor Force Participation Rate is the lowest since 1981.

So if this administration isn't doing its best to implement The Cloward-Piven Strategy, it's doing a damn fine imitation.

Let's hear from the experts instead. Ed Butowsky with Fox Business' Varney & Company discussed the impact of the drop in the weekly jobless claims relative to the Feds actions to potentially make money to help relieve economic stress.

I found the video here.